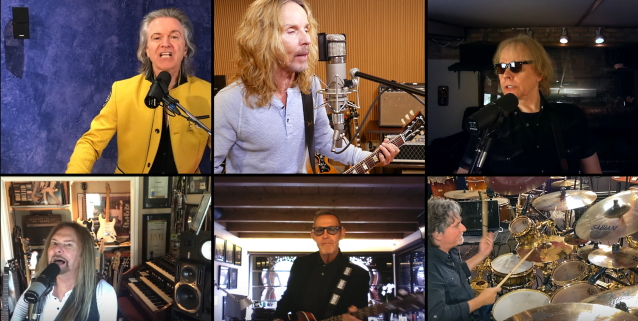 STYX has released a video for its classic hit "Too Much Time On My Hands", filmed from the band's home studios specifically for Pittsburgh #SteelersNation in time for yesterday's (Wednesday, December 2) game against the Baltimore Ravens.

STYX's affiliation with the Pittsburgh Steelers has been strong for years. One of the band's other signature hits, "Renegade", has been an adopted theme song of the team for over a decade, and they've sung the national anthem at many Steelers games in recent years.

STYX recently asked fans for donations to be made to the Pittsburgh Foundation Emergency Action Fund. The Pittsburgh region is facing unprecedented economic, health and human services challenges in the global public health pandemic brought on by the COVID-19 virus. In response, on March 16, local philanthropies partnered to create the Emergency Action Fund, which awarded operating grants on a rolling basis to emergency service providers and nonprofit organizations serving on the front lines of recovery.

STYX has spent the last few months working on its new studio album, The upcoming effort will be the follow-up to "The Mission", which was released in June 2017. That disc marked STYX's first new LP in 14 years. It was recorded at Blackbird Studios in Nashville, co-produced and co-written with Will Evankovich, a longtime collaborator of guitarist/vocalist Tommy Shaw's in the SHAW/BLADES band and who also plays with THE GUESS WHO.

STYX's James "JY" Young told Radio Forrest in September that the band will hold off on releasing the new album until it can go back on tour. "That's the current plan," he said. "Because we like to have everything kind of get launched at once. It's easier to make people aware of it if it's not released in a vacuum. But if you can get a tour going, and tickets are selling, and then the record's out, it's easier to build a critical mass for awareness."

This past August, Young told the Q105.7 radio station that STYX's next LP may not arrive for at least another year. "If Dr. Fauci [Dr. Anthony Fauci, the director of the National Institute of Allergy and Infectious Diseases] is right, [we won't be able to tour until] the end of [2021], so that would put us out in 2022, which would be the 50th-anniversary year of us signing our first recording contract, which is February 22, 1972," he said. "But if it's in '22 that this record comes out, it'll be 2-22-22, so maybe that's what we've gotta wait for."