Danish melodic death/thrash band SUBMISSION has posted another new song, "A Terror Within", on the group's MySpace page. The track comes off SUBMISSION's second album, "Code of Conspiracy", due on April 27 via Blistering Records.

According to a press release, "Code of Conspiracy" is "a grand tour de force in highly technical, yet still melodic and aggressive death/thrash played by highly skilled and ass kicking musicians — it's clear that SUBMISSION hold no fears towards colleagues such as MESHUGGAH, STRAPPING YOUNG LAD, SOILWORK or TEXTURES whatsoever!"

SUBMISSION's new album marks the debut of new singer Lasse Sivertsen, who replaced Steve Qvist, the man behind the microphone on the band's debut album, "Failure To Perfection" (Listenable Records, 2006).

Commented drummer Morten Løwe Sørensen: "I believe SUBMISSION has its own trademark. Our song structures are not common and there is a huge variety within our songs. The music is kind of technical but still with hit potential. Also, we have a range from very groovy and melodic parts to fast blast beats. In metal 'more is more' and I think SUBMISSION climbs that demand without losing perspective." 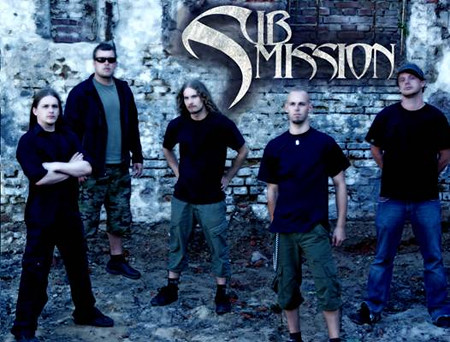