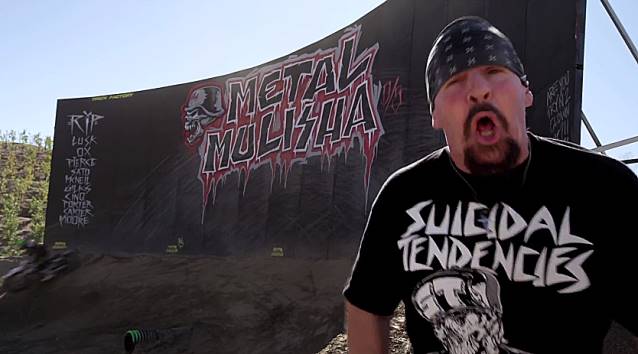 "Smash It!", the new video from the long-running Venice Beach, California thrash/punk band SUICIDAL TENDENCIES, can be seen below. The band was joined during the shoot by the Metal Mulisha freestyle motocross team.

Directed by Jay Schweitzer and Mike McEntire, the video features multiple Metal Mulisha riders, including Larry Linkogle and Jimmy Fitzpatrick, who sang backups on the song with the band in the studio. The project is in support of the Suicidal Tendencies X Metal Mulisha collaborative clothing collection brand launched for spring 2014, and is available now in select retailers and online.

Filmed over the course of two days at Larry Linkogle's O.G. Mulisha Compound in Temecula, California, the "Smash It!" video features the band showcasing their signature live performance styles, with an onslaught of energetic, musically enraged fans throwing elbows and fists in the pit, and Metal Mulisha team riders throwing down giant heart-stopping action the entire time. Extras flew in from as far away as Europe, and as close as down the street, to join in the action and to get their opportunity to meet the band and team riders, and to be a part of such a memorable project.

SUICIDAL TENDENCIES is currently on the road as part of its "Slam City Tour", which kicked off in San Luis Obispo on November 27, and will continue until later this month at the Ventura Theatre, before embarking on the "Persistence Tour" in Europe in January 2014.

The Metal Mulisha spring clothing line, including the SUICIDAL TENDENCIES collection, will be available at select retailers this month.

"Smash It!" comes off SUICIDAL TENDENCIES' new album, "13", which sold around 3,200 copies in the United States in its first week of release to debut at position No. 187 on The Billboard 200 chart. The first studio album in 13 years from SUICIDAL TENDENCIES was produced by vocalist Mike Muir and Grammy-nominated engineer/mixer Paul Northfield (DREAM THEATER, HOLE, RUSH).