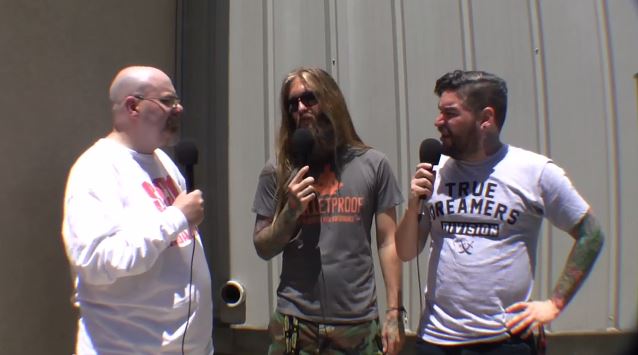 Soundcrave Magazine conducted an interview with guitarist Mark Heylmun and vocalist Hernan "Eddie" Hermida of California deathcore masters SUICIDE SILENCE at the July 12 stop of the Rockstar Energy Drink Mayhem Festival in Albuquerque, New Mexico. You can now watch the chat below.

"You Can't Stop Me", SUICIDE SILENCE's first album to feature Hermida and their first since the tragic loss of singer Mitch Lucker, was released on July 11 in Europe (except in the U.K., where it arrived on July 14) and was made available on July 15 in North America via Nuclear Blast Entertainment.

"The long and short of it is this," said guitarist Mark Heylmun. "Mitch left behind a set of lyrics with the title 'You Can't Stop Me'. This gave us chills, to say the least, and we knew we had the title and title track. This filled us with inspiration for writing sessions to empower us and empower you, the supporters of SUICIDE SILENCE."

Regarding the decision to enlist Hermida, Heylmun told Metalholic.com: "There was really nobody else — we didn't want to try anybody out. We didn't want to call people and be, like, 'You wanna come and jam with us?' That's not how this situation seemed like it would work for us. Eddie was just a friend. Somebody that we know is extremely talented, and someone that could put the passion behind the job that it is. To not replace Mitch or be the singer of this band, but to treat the gig that it is. He's replacing an idol to so many people and he's also coming into a band that preexists, which is the other four members of it. We just knew he would be able to handle it with respect and knock it out of the park."