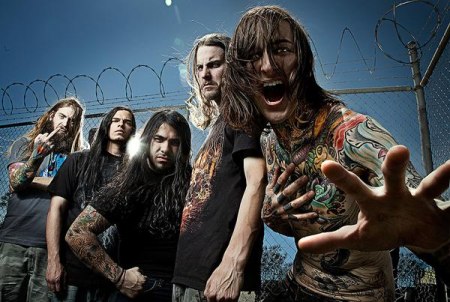 California deathcore masters SUICIDE SILENCE are preparing to enter the studio with heavyweight producer Steve Evetts (THE DILLINGER ESCAPE PLAN, EVERY TIME I DIE, HATEBREED) to create their most substantial piece of work to date. This summer, the yet-to-be-titled record aims to redefine heavy and further the band's dominating force within the extreme metal community.

SUICIDE SILENCE released a "tour edition" version of its latest album, "No Time To Bleed", in time for the band's recent European tour with AS I LAY DYING and HEAVEN SHALL BURN. The new expanded version of the CD includes two rare remixes as well as a full-length bonus DVD.

The set comes in an O-card with additional booklet pages and the original North American cover.

On June 29, 2010, SUICIDE SILENCE reissued the "No Time To Bleed" album in the U.S. as a special "body bag" edition featuring a bonus DVD containing never-before-seen live performance footage.

"No Time To Bleed" sold 14,000 copies in the United States in its first week of release to debut at position No. 32 on The Billboard 200 chart. The effort was made available on June 30, 2009 in a number of different versions.

"No Time To Bleed" was recorded with acclaimed producer Machine (LAMB OF GOD).