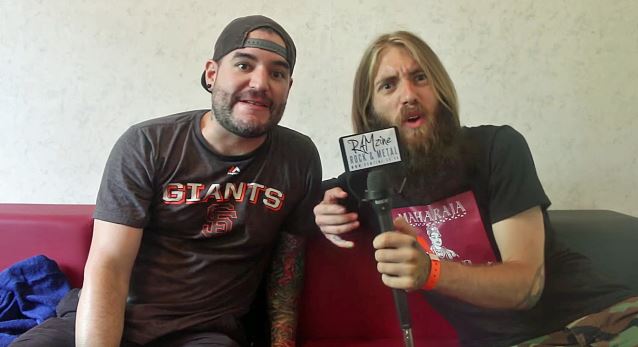 Victoria Purcell of RAMzine conducted an interview with vocalist Hernan "Eddie" Hermida and guitarist Mark Heylmun of California deathcore masters SUICIDE SILENCE at the 2015 edition of the the MetalDays festival, which was held on July 19-25 in Tolmin, Slovenia. You can now watch the chat below. A couple of excerpts follow (transcribed by BLABBERMOUTH.NET).

On whether making an entire album available for streaming on YouTube, as is the case with SUICIDE SILENCE's "You Can't Stop Me", is good promotion:

Eddie: "At the end of the day, if people wanna listen to the stuff you put out, YouTube does a really good job of keeping counts, and if you get enough people to watch your stuff, YouTube might wanna give you some cash, but, really, that's not why you make to begin with. And if you are making music for that reason, then you're a fucking idiot."

"It's the quintessential answer, ever since Napster and all the bullshit, ever since the Internet was capable of putting your art out there, and it basically showed the world that, at the end of the day, it's, like, art you can find wherever the hell you want, you can make art wherever the hell you want, and there's always gonna be somebody that outdoes you. Making an industry out of it is the most ass backwards thing that could ever happen to humanity."

On the fact that using iTunes to transfer music from your CDs is now illegal under U.K. copyright law:

Eddie: "Hey, man, guess what: it was illegal for me to make mixed tapes and give it to my girlfriend back in fucking… when I was doing that, and making ripped CDs and mixed CDs for people too, and I still did it."

Mark: "It's illegal to smoke weed in most places, and I still do that too."

Eddie: "I do the fuck out of that. I think there's a video on YouTube of me fucking showing some Chinese people how to smoke weed. I'm pretty sure they're all in jail now. Sorry, guys!"

On whether the music industry is doomed:

Eddie: "Let those idiots who are trying to fucking squeeze every penny out of an art die… There are people who are willing to give their money to an artist who is kicking his own ass out there, trying to show the world what love is, or trying to show the world what fear is — however you wanna document whatever an art is. There are gonna be people who are willing to support it. And the fact is that there's too many people out there trying to stick their fingers, and their hands, in our pockets, and that's where the industry is failing. And it's gonna fail, because greed is never gonna win."

"You Can't Stop Me", SUICIDE SILENCE's first album to feature Hermida and their first since the tragic loss of singer Mitch Lucker, was released in July 2014 via Nuclear Blast Entertainment.