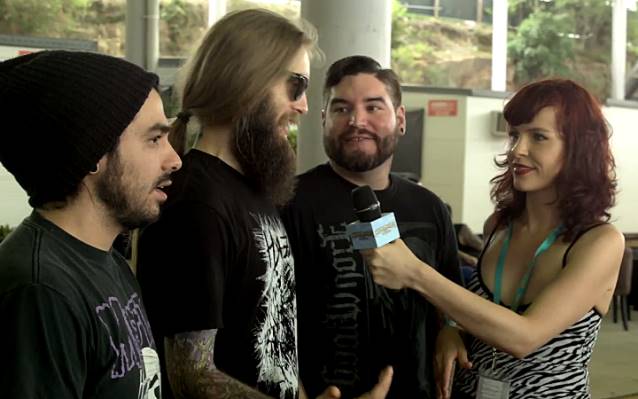 Heavy music presenter Christina Rowatt of Soundwave TV conducted an interview with California deathcore masters SUICIDE SILENCE earlier today (Saturday, February 22) at the Brisbane stop of this year's Soundwave festival in Australia. You can now watch the chat below.

According to Hermida, SUICIDE SILENCE's next CD will include a song containing some of Lucker's final lyrics. He said: "We have a song on there. Mitch left behind some lyrics, and we actually incorporated it into a song. It's about him being bigger than life, you know what I mean?! It's about finding that true resilience within yourself to keep going, which really means the world to us, 'cause, obviously, that's what we're doing. It came out very beautiful."

"This record will be the grittiest, most meaningful piece of work we've ever stood behind,” commented guitarist Mark Heylmun. "We cannot wait for everyone to hear it.

"Steve Evetts is someone we've worked closely with for a long while, not only on 'The Black Crown', but also on some instrumental demos just prior to the tragedy last fall. Here we are a year later prepping to record the nastiest, heaviest, most disgusting work we've ever done. Expect the unexpected."

The Pomona concert was professionally filmed for a DVD, "Suicide Silence - Ending Is The Beginning: The Mitch Lucker Memorial Show", that was released on February 18 in North America and will be made available March 17 in Europe as a CD/DVD digipack and CD/Blu-ray combo pack.