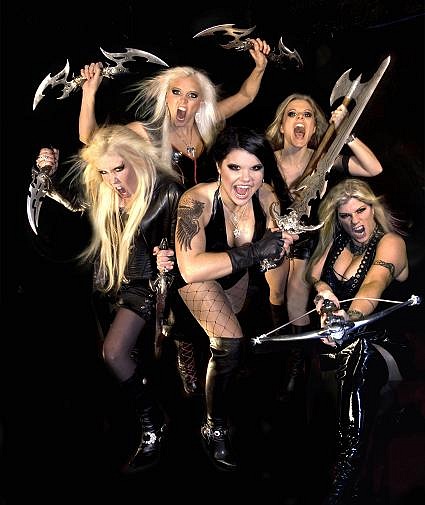 Two Swedish all-female metal bands — HYSTERICA and FRANTIC AMBER — will team up for a Russian tour in early March. The four-date trek will include a stop at the biggest Russian female voice festival Zheleznye Devy (Iron Maiden),which will celebrate its fifth anniversary this year.

The MANOWAR-inspired heavy metal band HYSTERICA gained notoriety after the release of its debut album, "Metalwar", which was mixed by Peter Tägtgren (PAIN, HYPOCRISY). In 2010 HYSTERICA was honored with the "Best Newcomer" award at the Swedish Metal Awards. A new album is currently being mixed and mastered by Pontus Norgren (HAMMERFALL) and Marcus Jidell (EVERGREY).

Comments HYSTERICA: "We look forward to coming to Russia and we are honored to perform at the festival Zheleznye Devy. We hope that many Russians will join us in the Metal War!!"

The Stockholm-based melodic death metal band FRANTIC AMBER entered the scene last year with a bang with a highly rated video and gigs, including an appearance at the Sweden Rock Festival. A multinational act — with Mary (guitar) and Emlee (drums) hailing from Sweden, Elizabeth (vocals) from Denmark, Sandra (bass) from Norway and Mio (lead guitar) from Japan — the group last month released a new five-song demo, "Wrath Of Judgement", via FRANTIC AMBER's revamped MySpace page and official web site.

Comments FRANTIC AMBER: "We are very excited to come to Russia together with our friends and metalsisters in HYSTERICA and play at Russias biggest female-voice festival Zheleznye Devy! We are really looking forward to meet metalheads from Russia and be introduced in the Russian metal scene."