New Jersey's progressive metal masters SYMPHONY X have announced their "25th Anniversary North American tour 2020". The 28-date trek will kick off in Englewood, New Jersey on May 14 and make stops in Montreal, Cleveland and Austin before concluding on June 17 at The Masquerade in Atlanta. Support on the trek will come from PRIMAL FEAR and FIREWIND.

SYMPHONY X comments: "We are extremely excited to celebrate this milestone in our career! The shows in Europe and South America were incredible last year and we can't wait to share that with our amazing U.S. fans in 2020! We are truly excited to have both PRIMAL FEAR and FIREWIND on this tour to celebrate 25 years of a true musical journey! The band is at a place where we are looking forward to the future and bringing even more music to those who have been with us all this time! See you in 2020!"

SYMPHONY X released its latest critically acclaimed studio album, "Underworld", in 2015 via Nuclear Blast. They triumphed in creating a panoramic 'album rock' experience in an era cursed with diminishing attention spans. Heavily inspired by the Italian poet Dante Alighieri, "Underworld" drew on the themes from the "Divine Comedy", most notably the part on "Inferno". As homage to Dante's use of the number 3 and its multiples, the band utilized the motif in both lyrical and melodic context. The first song on the album is a three-syllable, three-note melodic phrase and in the verses, there are three references to three songs on the band's third album, "The Divine Wings Of Tragedy". 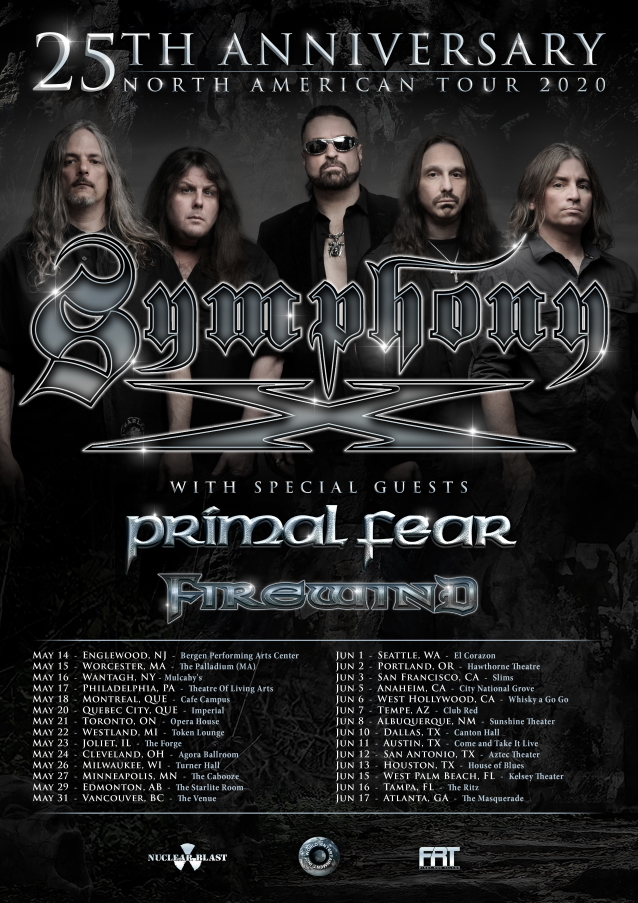