New Jersey's progressive metal masters SYMPHONY X have announced the rescheduled dates for their "25th Anniversary North American Tour". The 28-date trek, which was originally scheduled to kick off in Englewood, New Jersey on May 14 and and conclude on June 17 at The Masquerade in Atlanta, will now take place in May and June 2021. Support on the trek will still come from PRIMAL FEAR and FIREWIND.

SYMPHONY X is expected to enter the studio later this year to begin work on the follow-up to 2015's "Underworld" album.

During a recent appearance on the "Aftershocks" podcast, SYMPHONY X bassist Mike LePond was asked if he feels being labeled a "progressive" metal act has prevented him and his bandmates from reaching a wider audience. He responded: "Being pigeonholed as a progressive metal band, I think, has cost us a lot of fans. The only progressive metal band they know is DREAM THEATER, and they say, 'Well, I don't like DREAM THEATER, [so] I'm not gonna listen to these guys.' And I don't think we sound anything like DREAM THEATER at all.

"I joined the band in 1999, and I swear to you that, for the whole time — from 1999 to now — we have gotten compared to DREAM THEATER. And it seems like that's the only band we get compared to.

"We think our music can cross over into prog fans and to heavy metal fans, because I think our stuff is super heavy, and it's really not all that progressive.

"In the early youth of the band, I could kind of understand it, but since, I'd say, at least for the last — let's see; when did 'Paradise Lost' come out? Around 2007. All right. So I'd say for the last 13 years, the stuff has really not been that progressive; it's been more metal and heavy.

"But, yeah, that's always a problem. We always get compared to DREAM THEATER. I guess it's just something that will never change. It is what it is. We just accept it now. But we think that we can play on a tour with DREAM THEATER or MEGADETH — either one." 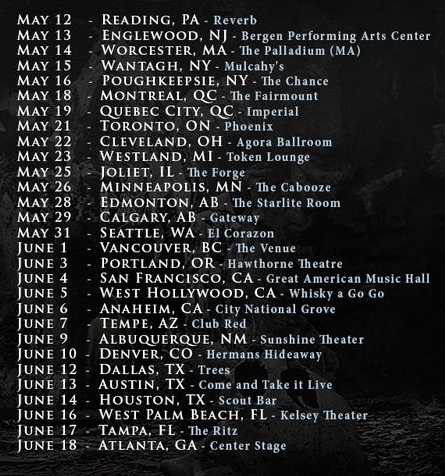