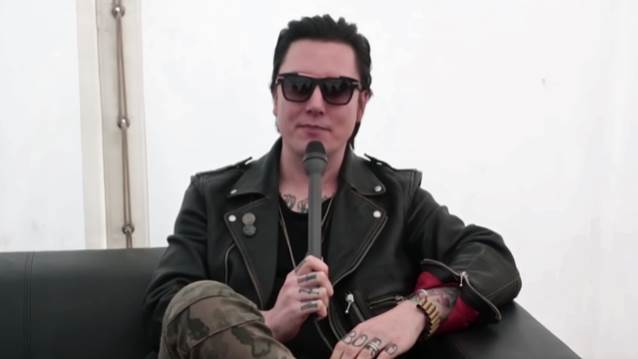 Kaaos TV conducted an interview with AVENGED SEVENFOLD guitarist Synyster Gates before the band's June 9 performance at Rockfest festival in Hyvinkää, Finland on June 9th, 2018. You can now watch the chat below. A couple of excerpts follow (transcribed by BLABBERMOUTH.NET).

Synyster: "[I'm] very pleased with it. I think it did a lot of cool things for us as far as… I think we gained some respect from our contemporaries. I think it put us into a different, more mature kind of category. And as just an artist, I'm very, very proud of the type of music it is. It was such a challenge writing a record like that, but it was so much fun, because it was no holds barred — we wrote whatever the hell we wanted to write — and it was an amazing time and place."

On AVENGED SEVENFOLD's decision to "surprise-release" "The Stage" in October 2016:

Synyster: "I think we'd probably do it again, but I don't think it worked out to the greatest financial benefit. But I think what it did, as far as the artistry surrounding a move like that, I feel very, very proud that we did something that was very, very unique, that hadn't been done before. And we got to play on top of Capitol Records [building in Los Angeles to promote the album's release], so how can you really regret it?"

On whether he thinks there's too big a gap between when an artist records and album and when it gets released:

Synyster: "Definitely. I mean, the proper thing is to promote it correctly. You have major labels that are giving you money — they're investing in you to do what you do, because they believe in you, and they also believe it's gonna put money back in their pocket and they will have a solid return on investment. I don't know if that's what worked out very well for all parties included, but I'm really proud of our and Capitol for allowing us to do such an amazingly unique thing. And we're very fan-centric — we only care about what we think as artists and what our fans care about, and we know they were very excited for us to do something special like that."

On whether AVENGED SEVENFOLD has already started work on the follow-up to "The Stage":

Synyster: "We have not begun work [on the next record] — I can promise you that. Other things we have been working on, but we have not been working on a new album yet. We are focused on touring. We focus on one thing at a time, because if we don't do that, then you get diluted versions of each thing. Our focus needs to be here so we can play the best show possible. Otherwise, the kids can tell in two seconds if it's a fraudulent performance. We've gone up on stage — I won't name any times or places — but we've been up on stage when our heart wasn't in it, and the fans saw right through it; you see the backlash online and in the press and all that kind of shit. So we've learned our lesson. We've always tried to put on the best show, but now we just do our best to have a 110-percent focus on what we're doing so we can have a 110 percent of a product delivered to our fans."

On whether he and his bandmates do any writing on the road:

Synyster: "I write a little bit of music, but to write an AVENGED record and an AVENGED SEVENFOLD song, it's so deep and so involved, it takes a lot of time and energy that jamming around on an acoustic guitar, thinking about choruses or thinking about different things or working on philosophies of songwriting or solos, or whatever it might be, that's completely different than sitting in a room with the rest of the guys and looking up, all of a sudden, and it's been eight hours of writing, and it's gone by like that. That's what our writing session is like — it takes up all of our energy and time and focus, so we just have found that we can't do that on the road."