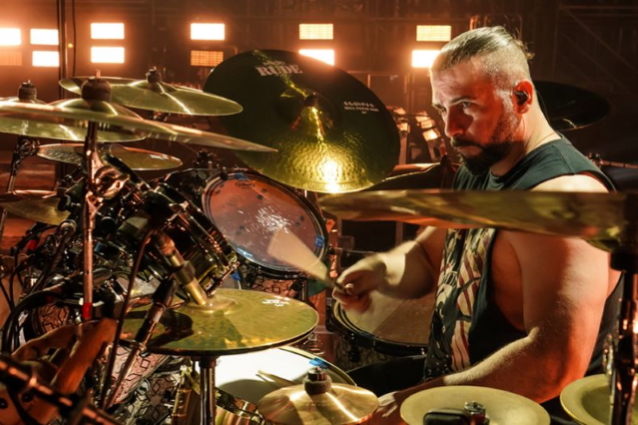 SYSTEM OF A DOWN's JOHN DOLMAYAN Says '...And Justice For All' Is METALLICA's Best Album: 'It's Them At Their Most Perfect'

SYSTEM OF A DOWN drummer John Dolmayan has praised METALLICA's "...And Justice For All" album, calling it "the most complete set of songs" the California metal legends have ever written.

Speaking to Metal Hammer magazine about the 10 records that changed his life, Dolmayan said about "...And Justice For All": "Apart from the fact that there is no bass on it, it is the most complete set of songs that that band has ever written — the most complete, the most complex. There was so much fire in their bellies as they had just lost [bassist] Cliff Burton. So, I think emotionally, it was where they were at their best. But for me, it's them at their most perfect. Nothing can come before and nothing has come since where they nailed it. They extended everything, and for me, it is their apex."

In a 2015 interview with Ultimate Guitar, Steve Thompson, one of the "...And Justice For All" mixers suggested that Ulrich was the culprit for the lack of any bass guitar on the record, claiming that Lars wanted his drums to sound a certain way — even if it meant cutting out the bass. Thompson said that he spoke out because he was tired of being blamed for the lack of bass. He remarked: "They flew us out [to METALLICA's Rock And Roll Hall Of Fame induction in 2009] and I'm sitting with Lars. He goes, 'Hey, what happened to the bass in 'Justice'?' He actually asked me that. I wanted to cold cock him right there. It was a shame because I'm the one getting the shit for the lack of bass."

Last year, METALLICA frontman James Hetfield dismissed calls for METALLICA to remix "…And Justice For All" so that Newsted's contributions are more audible.