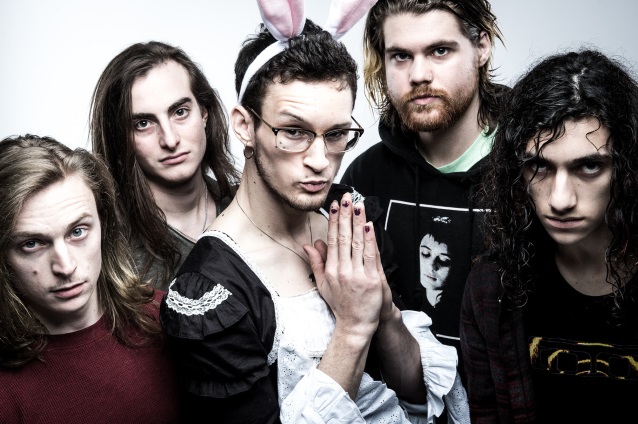 Pennsylvania metal band TALLAH — which features in its ranks Max Portnoy, son of Mike Portnoy (DREAM THEATER, AVENGED SEVENFOLD, THE WINERY DOGS, SONS OF APOLLO) — has released a video for the song "Placenta". The track is expected to appear on the group's upcoming five-song EP.

Max stated about video: "It's like 2001, but with all the new age twist you could want and none of the rehashed bullshit."

TALLAH is comprised of Justin Bonitz on vocals, Andrew Cooper on bass, Derrick Schneider on guitar, AJ Wisniewski on guitar and Max Portnoy on drums. They have a shared passion for playing intense, angry, loud, heavy, and intricately weird music. The band relies on the spirit of innovative metal realized through panicked guitar screams treated with industrial elements and distortion. Screaming vocals mixed with melodic choruses and driving bass guitar with deep and dirty tones sync up effortlessly with the thunderous bellows of the drums and screeching ping of the snare.

TALLAH made its live debut in Brooklyn, New York and recently played two shows on the Schecter stage at NAMM 2018.