TANKARD: New Song 'Fooled By Your Guts' Available For Streaming

German beer lovers and cult thrashers TANKARD will release their new album, "R.I.B." (Rest In Beer),on June 20 via Nuclear Blast. The follow-up to 2012's "A Girl Called Cerveza" was recorded at Studio 23 in Frankfurt, Germany.

The song "Fooled By Your Guts" can be streamed below.

States TANKARD vocalist Andreas "Gerre" Geremia about the track: "A man has been suffering from sudden symptoms of drunkenness. For a long time he has been accused of alcoholism, but then his strange and rare disease was discovered by medics. The man suffers from the so-called self-brewery-syndrome. A form of yeast inside his stomach is feeding on sugar and not only produces carbon dioxide, but also alcohol. A true story, calling for TANKARD to use for their lyrics! A real thrasher that will be given the second official video of the new album!"

"Fooled By Your Guts" will also be available as a digital single as well as a vinyl split single with a brand new DESTRUCTION song. Further information will follow soon.

Taking inspiration from the motto "never change a winning team," TANKARD is working with producer Michael Mainx (BÖHSE ONKELZ, DER W, D-A-D, DISBELIEF),who helmed the band's last effort. TANKARD has also chosen to use Patrick Strogulski, who created the artwork for "A Girl Called Cerveza" and is also a student of Sebastian Krüger, the artist that was responsible for TANKARD's previous album artwork up to the 2012 release.

States Geremia: "'R.I.B.' continues the story of 'Chemical Invasion'. The crazy professor is back is takes revenge on mankind, because he failed in 1987! The cover is done again by Patrick Strogulski, an apprentice of Sebastian Krüger and really hits the spot! As always with TANKARD, things shouldn't be taken too seriously!" 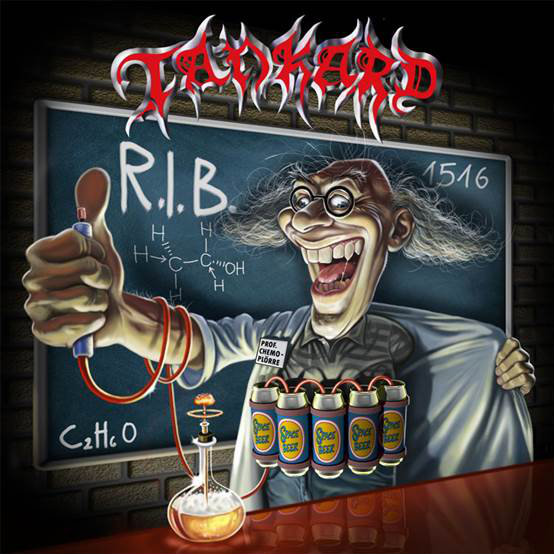