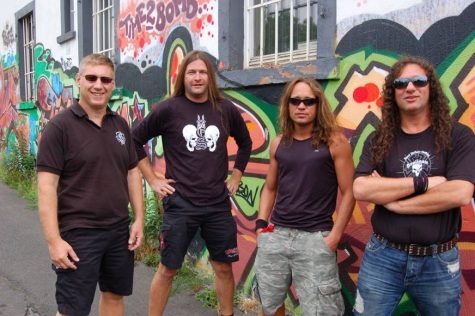 German alcoholic thrashers TANKARD have inked a deal with Nuclear Blast Records. The band's new album is tentatively due this summer.

Commented TANKARD vocalist Andreas "Gerre" Geremia: "As the want-away footballers always say, I'm looking for a new athletic challenge… baloney! We've only inked a deal with Nuclear Blast because they've offered most prest-money for a transfer…. Hahaha, okay, seriousness aside: We're totally happy to have found accommodation at the metal label No. 1 and are chuffed about the collaboration, hoping that this will give TANKARD a big boost in their 30th year of existence! It took quite a while 'till we came ashore here, but then again, Rome wasn't built in a day, as we all know!"

Added Andy Siry, Head of A&R at Nuclear Blast: "From the 'Hardcore Party 1987' in Oberursel (live TANKARD, ANGEL DUST and DESTRUCTION) on, I've taken TANKARD into my heart. With the signing of TANKARD's contract, the 'best-case scenario' has finally come to pass.

"I'm absolutely delighted that we've come to an agreement with our Hessian buddies — even though I'll unfortunately suffer from the signing party's aftermath for some more days, haha.

"Joke apart. I'm very happy that TANKARD will be members of the Nuclear Blast family from now on and will enrich our roster of dyed-in-the-wool thrash metal bands. And announcing this new signing on Valentine's Day proves that this is more than just a business matter to us. After 25 years of 'concubinage,' we've finally tied the knot in the big anniversary year (25 years of Nuclear Blast, 30 years of TANKARD). By the way: We're expecting our first offspring to be born this summer."

TANKARD's fourteenth studio album, "Vol(l)ume 14", was released on December 17, 2010 via AFM Records. The limited-edition digipak version of the album includes a bonus DVD containing footage of TANKARD's performance at the 2009 edition of the Headbangers Open Air festival, which took place July 23-25, 2009 in in Brande-Hörnerkirchen, Germany.