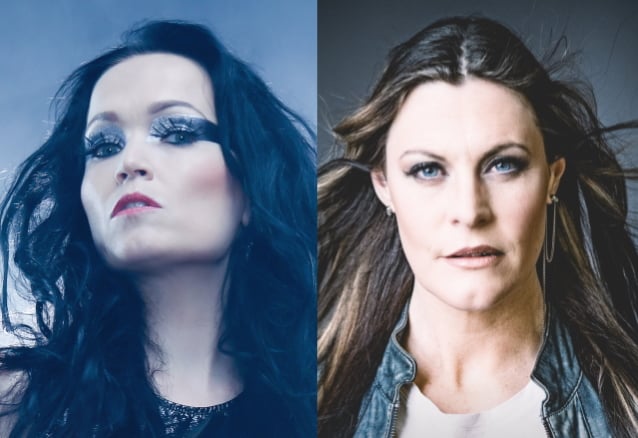 TARJA TURUNEN Says She Is Supportive Of Current NIGHTWISH Singer FLOOR JANSEN: 'We Are Sisters In Metal'

During an appearance on a recent episode of the "Scars And Guitars" podcast, former NIGHTWISH vocalist Tarja Turunen was asked if she has ever had any interactions with current NIGHTWISH singer Floor Jansen. She responded (as transcribed by BLABBERMOUTH.NET): "We are in touch, and recently more, because she came up with the really horrible news of being sick. [Editor's note: Jansen recently revealed that she was diagnosed with breast cancer.] So I've been in touch with her. But ever since she joined NIGHTWISH, I was there for her. So it's, like, I don't have any… Actually, I hope she's fine and everything is great with her and she's happy. That's what I wish. Now and then when I am in Netherlands, if I have concerts in Netherlands, she's poking by and so on and so on. It's really, really nice.

"When I started in metal, I felt a little lonely, because there were not too many girls around in the festivals I went; I was mainly the only girl all around," Tarja revealed. "And nowadays it's so incredible to see so many female vocalists. They approach me — if I do not recognize them, they approach me — they come and talk. And it's really lovely. We have this really beautiful connection and a lot to share. And that is also… I really enjoy it so much nowadays. It has changed a lot."

In December 2020, Turunen took part in an Instagram Live chat with Jansen. You can watch the entire 48-minute discussion below.

In 2019, Turunen dismissed Internet chatter about her possible return to NIGHTWISH after her December 2017 onstage reunion with the band's then-bassist/vocalist Marco Hietala during a "Raskasta Joulua" concert in Hämeenlinna, Finland.

Tarja will release a new collection, "Best Of: Living The Dream", on December 2 via earMUSIC.