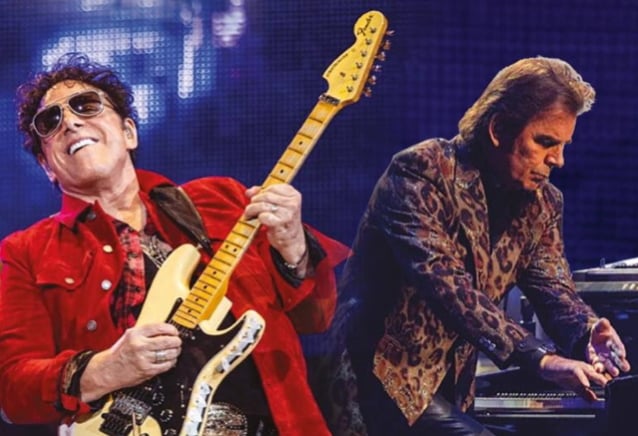 JOURNEY guitarist Neal Schon says that he had "no choice" but to file a lawsuit against the band's keyboardist Jonathan Cain over allegations that Cain is blocking access to "critical" financial records.

In a lawsuit filed last month in California state court, Schon claimed that Cain set up an American Express card without telling Schon and that "millions of JOURNEY funds have flowed through it."

On Monday (November 21),several hours after Schon's legal action was covered by a number of media outlets, Neal took to his social media to write: "The only comment I'll make at this time is it's all very unfortunate and tried for over a year to attain all our corporate records for Nomota with many personal e-mails to Jon as well as many legal letter stating it's my legal right to see all but I was left with no choice but to take it legal," he added, referencing the limited-liability company Cain and Schon established in 1998 to handle JOURNEY's business dealings, with shared 50/50 ownership.

"There's much more … since I filed I'll be following my attorneys advice and not speak until we are in court where I'll not have a problem at all. It is what it is."

An earlier message on a social media account Neal shares with his wife, Michaele Schon, read: "Thankful for American Express and the Bank for telling Neal Schön the truth about Jonathan Cain and Paula White going behind Neal's back . Adding Paula White to JOURNEY corporate Banking in 2020 is unethical and unlawful to Neal, he said never do it , they did it anyway . Good for the honest bank rep. Thankful #thankful #faith".

The filing says: "Schon has tried to avoid legal action, repeatedly requesting that Cain grant him access to the AMEX account. For many months, Cain and his representatives have represented that Schon would be granted access. But every time Schon contacted AMEX, AMEX informed him that he was still not authorized to access AMEX account records."

"As a member and manager and founder and leader of JOURNEY, Schon has the right to access and control Nomota's books and records," the documents say, referencing the limited-liability company Cain and Schon established in 1998 to handle JOURNEY's business dealings, with shared 50/50 ownership. "Schon must have unfettered access to Nomota's records so he can oversee and manage Nomota/JOURNEY."

The JOURNEY founder claims that, despite many requests for Cain to turn over key records, Cain has kept him in the dark about their finances.

"Nomota's records also contain financial information necessary for Schon and his representatives to determine the proportion of JOURNEY's profits that he's entitled to as the founder and president of JOURNEY," the suit states.

"Schon's right to JOURNEY's profits is being controlled by Cain — Schon's bandmate, who Schon brought into the band in the 1980s — and despite all of his requests and efforts, Schon has been unable to get full access."

The suit continues: "Among other things, the American Express account of Nomota has been set up such that only Cain has control of the account and access to its records. On information and belief, millions in JOURNEY funds have flowed through this AMEX account."

The filing adds: "Cain is interfering with JOURNEY, refusing to respond to booking opportunities, blocking payment to band members, crew and vendors, refusing to execute necessary operating documents, and in other ways as well. Cain has obstructed Schon from viewing expenses incurred by Cain and his touring party on band tours.

"Cain has further refused to deal with critical, time-sensitive touring contracts for JOURNEY's 2023 tour and ensure payment for band members and crew, who Cain contends are 'non-essential,.' Schon believes those band and crew who are crucial to the band's success should be paid. Cain's conduct is inexplicable."

Schon and Cain, through their company Freedom JN LLC, own the trademark registrations to many of JOURNEY's biggest hits, covering the use of the names on T-shirts, hoodies and other forms of apparel, making it easier for the band to sue someone selling those items. The U.S. Patent and Trademark Office issued the registrations between February and May.

In his petition, Perry claimed the trio had an agreement that required unanimous consent for any business decision related to the trademarks and that he had not authorized said consent. He also accuses Schon and Cain of "fraud on the trademark office" by what he claims is inaccurate information about the trademark.

Three and a half years ago, Schon and Cain were embroiled in a legal dispute with former JOURNEY drummer Steve Smith and Valory. On March 3, 2020, Schon and Cain filed a lawsuit against Valory and Smith, who had been members of JOURNEY on and off since the band formed in 1973, claiming the two attempted a "coup" in order to gain control of the JOURNEY trademark. The suit, which sought more than $10 million in damages, accused Smith and Valory of holding an "improper" shareholder and board of directors meetings in February 2020 during which they ousted Cain and Schon from leadership posts at Nightmare Productions under the "incorrect" assumption that the company held the rights to the JOURNEY name. An answer filed by counsel defending Valory against the complaint's allegations and the cross-complaint attempted to dispute and refute these allegations. In April of 2021, Schon and Cain "reached an amicable settlement agreement" with Smith and Valory. JOURNEY now consists of Schon and Cain, longtime singer Arnel Pineda, drummer Deen Castronovo, keyboardist/backing singer Jason Derlatka and bassist Todd Jensen.

The only comment I’ll make at this time is it’s all very unfortunate and tried for over a year to attain all our...