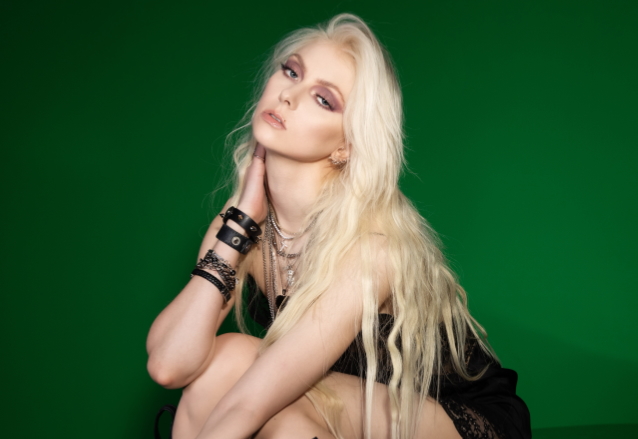 TAYLOR MOMSEN On TAYLOR HAWKINS Tribute Concert: 'It Was An Absolute Honor To Be Asked To Sing At That'

THE PRETTY RECKLESS singer Taylor Momsen spoke to NME about her involvement with the tribute show for FOO FIGHTERS drummer Taylor Hawkins in California in September. At the event, Momsen fronted a band including former NIRVANA members Dave Grohl and Krist Novoselic and SOUNDGARDEN's Matt Cameron and Kim Thayil, playing versions of SOUNDGARDEN's "The Day I Tried To Live" and "Black Hole Sun".

"It was an absolute honor to be asked to sing at that,” said Momsen. "I loved Taylor dearly. What an incredible musician and one of the best people I've ever met in my life. It was just an extraordinarily moving night. The energy in the room was beautiful. Everyone who was there was there for the right reason; egos were checked at the door. And then, obviously, to play with some of my heroes of music was just unbelievable. I have to mention Dave and the FOOs as well; the way they went about the show was so well done and so beautiful. It was a very moving evening, very emotional. I feel like Taylor would have really loved it. Dave did a wonderful job honoring his friend."

Upon release, "Death By Rock And Roll" topped multiple sales charts — including Billboard's Top Albums, Rock, Hard Music, and Digital charts. The record also yielded three back-to-back No. 1 singles — "Death By Rock And Roll", "And So It Went" (featuring Tom Morello of RAGE AGAINST THE MACHINE) and "Only Love Can Save Me Now" (featuring Thayil and Cameron). The band has tallied seven No. 1 singles at the rock format throughout its career.