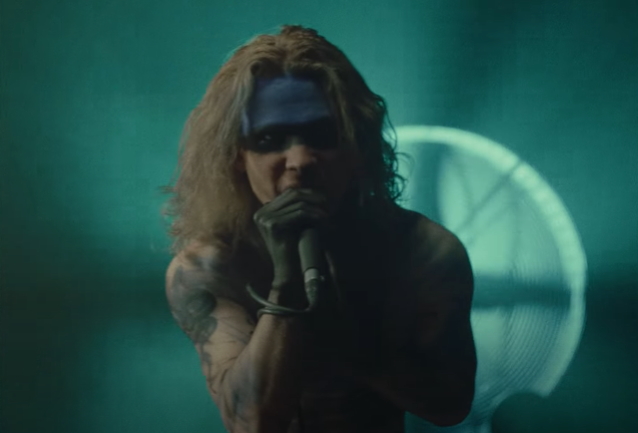 Griffin commented: "'Overall' is a song about getting trapped in your own head and having your thoughts self-sabotage you. And how sometimes YOU are the only person who can help yourself get out of that headspace. 'I salt the wound myself' has a double meaning; you either feel the pain from bad thoughts, or you lean into it and embrace them."

Late last year, VENDED dropped a duo of singles ("Asylum" and "Burn My Misery") ahead of its five-track debut EP, "What Is It / Kill It", which arrived at DSPs in November 2021. The collection was recorded with Griffin Landa of THE ACACIA STRAIN. The two singles bookended VENDED's first U.S. headline tour, after which the band went on to open the day's proceedings at the huge Knotfest Los Angeles show at the Banc Of California Stadium, playing alongside SLIPKNOT, BRING ME THE HORIZON, KILLSWITCH ENGAGE, FEVER 333, CODE ORANGE and CHERRY BOMBS.

In July, VENDED released a new single, "Ded To Me", ahead of its first-ever European dates.

Last month, Griffin spoke to Heavy New York about his live approach with VENDED. He said: "Our goal is not to be up on stage and be, like, 'Look at us. We're so cool. We're so this.' Our goal is to entertain you; our goal is to make you feel better. Because everyone feels like shit nowadays. And it's just kind of nice to have someone just kind of hurt themselves on stage just screaming and then wake up the next morning with back problems and then have you go home and be, like, 'You know what? That was a really nice experience. I can kind of see where these guys are coming from.' And if you didn't enjoy our shows, that is completely fine. There have been shows that I have gone to where I was just, like, 'Oh, not my cup of tea.' And that's completely your choice to not like our music, because, honestly, it just makes us try harder and it makes us take steps to, not change ourselves so much that it's almost unrecognizable but change ourselves to the point where it's just, like, maybe we can do it again and maybe we can try again."

Formed in February of 2018 in Des Moines, Iowa, VENDED exhibits a furiously heavy sound built upon the foundations laid by the speed, power and precision of the rhythm section, layered with ferocious guitars, soul crushing solos and gutteral-yet-melodic vocals that portray the hardships and the harsh realities of life.

Griffin, who looks a lot like his father, previously showcased his skills when he joined Corey onstage during STONE SOUR shows in 2017 and 2018. He's also played cover tunes with Simon Crahan, while Clown's daughter Alexandria Crahan-Conway has snapped some of VENDED's previous press pics.