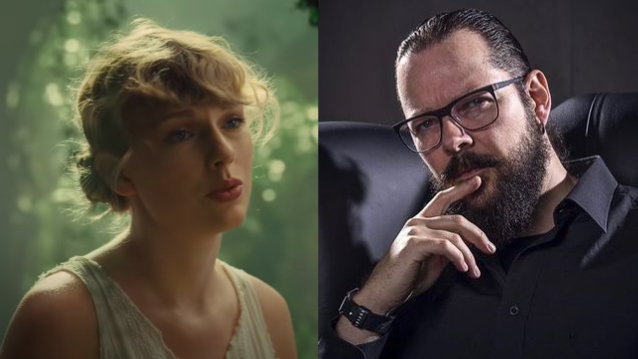 After Taylor Swift announced her new album "Folklore" last Thursday, many music fans pointed out the similarities between the pop superstar's new cover artwork and the black metal community, which is closely linked to the world of folklore and dark fairy tales.

Among the people who noticed "Folklore"'s metal vibes is Ihsahn, frontman of Norwegian black metallers EMPEROR, who went as far as to share a side-by-side comparison of the Swift album cover — featuring Taylor standing in the middle of the woods in black and white — and that of "Telemark", the solo EP he released this past February.

Earlier today, Ihsahn wrote on Instagram: "So, anyone check out the new @taylorswift yet? Personally I like the design" The musician, whose real name is Vegard Sverre Tveitan, also reposted a message from the "Telemark" artist David Thiérrée, who wrote: "Well, folks, I'm not the only one to think that Taylor Swift's new visual is very Metal... Even very close to Ihsahn's artworks I made. I could have done it for her, probably for a cheaper price than what she paid #taylorswift #taylorswiftfolklore #folklore #blackmetalart #telemark #davidthierree #darkarts #metalcovers #artist #artwork #metalartist #owlstrollsanddeadkingsskulls #blackmetalmusic #blackmetalcovers"

When Swift released her 2017 album "Reputation", many were quick to notice the similarities the cover art had to the hardcore genre — namely, the hardcore-inspired font.

So, anyone check out the new @taylorswift yet? Personally I like the design🤯😂 #Repost @davidthierree ・・・ Well, folks, I 'm not the only one to think that Taylor Swift' s new visual is very Metal... Even very close to Ihsahn 's artworks I made. I could have done it for her, probably for a cheaper price than what she paid 😁😅 #taylorswift #taylorswiftfolklore #folklore #blackmetalart #telemark #davidthierree #darkarts #metalcovers #artist #artwork #metalartist #owlstrollsanddeadkingsskulls #blackmetalmusic #blackmetalcovers