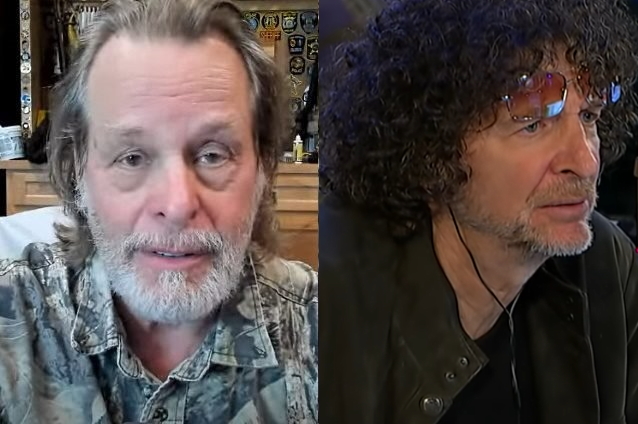 Ted Nugent has once again spoken out aganist the campaign to kick podcast host Joe Rogan off Spotify for allegedly spreading false narratives about the coronavirus.

Last month, critics said Joe uses his "The Joe Rogan Experience" podcast to peddle dangerous misinformation about COVID-19 vaccines to his millions of listeners. A backlash followed, including legendary rocker Neil Young removing his music from the streaming platform and a petition demanding action from Spotify signed by hundreds of doctors, scientists and public health professionals.

Nugent weighed in on the controversy swirling around Rogan's podcast during today's (Wednesday, February 14) edition of "The Nightly Nuge", a news-style clip in which Ted offers his take on the news of our world every night "in a concise, fiery fashion that [is] totally Ted." He said (as transcribed by BLABBERMOUTH.NET): "I have great admiration and respect for Joe. He's carved out a meaningful, positive force that's not just good for his family and friends, but I think it's good for America; I think it's good for humankind because his podcast is the number one podcast on planet Earth. And what is a podcast but a celebration of dialogue and communication — not just a respect and indulgence of alternative points of views, but the pursuit and celebration of alternative points of view. So he's really cut a niche for himself that goes far beyond anybody else I can really think of."

Ted, who has been a guest on Joe's show three times, continued: "I was on Howard Stern's radio show going all the way back to the '70s and I've watched him turn into an isolated jackass, really, not really respecting alternative points of view and presuming and falsely accusing me, for example. So, where I've had a good time with people like Howard Stern, who's a powerful force in the media, but he was never a journalist, he was never a truth seeker. And Joe Rogan has accomplished that with much aplomb, dare I say.

"Joe Rogan was brave and courageous and unafraid to bring on other people's views and experiences and points of views, including word-class, revered epidemiologists and virologists to bring in truth about certain medicines and certain emergency shots," Nugent added. "So, God bless Joe Rogan.

"Be afraid of nothing. Get all the information you possibly can. And if you rely on your instinct, data, footage, documents, evidence… You can go to the Nuremberg trial for some information, I suspect.

This is not the first time Nugent has been critical of Stern. Back in January 2014, Ted took to his Facebook page to write in a since-deleted post: "Howard Stern is a punkass liar making absurd claims about me he knows damn well are 180' contrary to my universally known beliefs & clearly articulated statements in 1000s of interviews over more than 40 years about guns including many on his own shows. Can the guy be so dishonest as to pretend he doesn't know? I dare the liar to attempt to debate me instead of lying in the safe TedFreeZone of his studio protected by the guns he & his securityboys carry. Mighty dumb & hypocritical by an otherwise smartguy. Cmon Howy, I dare ya. Invite me to go Peirs Morgan on your lyin ass live on your show ASAP."

Two years earlier, Stern called Nugent a "big pussy" after the conservative rocker came under fire for comments he made about the 2012 election at a National Rifle Association convention, including that he would "either be dead or in jail by this time next year" if President Barack Obama was re-elected. On his SiriusXM morning show, Howardsaid about Ted: "I love that guy. He's nuts… He's one of those guys who kills deer, so he thinks he's, like, a tough guy… During the Vietnam War, he admits that he peed his own pants and shit his pants for a week and went down there and got out of the draft. If he's so tough, why don't you go in the fucking military… He talks about fighting for his freedoms. Who is he fighting — deer? I mean, who is he fighting? As far as I know, he's fighting deer… Why doesn't he sign up for Afghanistan? He should be playing 'Cat Scratch Fever' at some fair, which is probably what frustrates him most…Just a big pussy with a fucking gun."

In response to the controversy surrounding his podcast, Rogan promised to "do my best, in the future, to balance things out," while Spotify said it would add content advisories to podcast episodes with information about COVID-19. In an almost 10-minute-long Instagram video, Rogan said he would "try harder to get people with differing opinions on" on his show, which averages 11 million listeners per episode.

Earlier in the month, Stern himself weighed in on the controversy over COVID-19 misinformation on "The Joe Rogan Experience". Speaking on his SiriusXM radio show, Stern said Rogan should say: "I'm wrong, and go get the vaccine before you die."

"The whole thing with Joe Rogan is so silly to me," Stern said. "Even the apology he just should've said, 'You know what? Listen, I'm a comedian... And I have no idea what I'm talking about'."

"I have no medical background whatsoever to be telling people what to do with their health.

Spotify company's chief executive Daniel Ek has defended Rogan in the past, including after an episode that featured the conspiracy theorist Alex Jones in 2020.