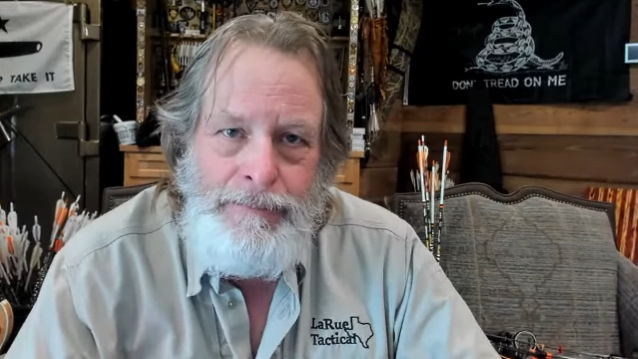 TED NUGENT: 'COVID-19 Will Go Down In History As The Biggest Scam Known To Man'

Outspoken conservative rocker Ted Nugent, who regularly promotes conspiracy theories about everything from the COVID-19 pandemic to the U.S. Capitol riot, was asked in a new interview with American Songwriter why he thinks he has become such a lightning rod for controversy over the years. He responded: "It's all so simple, it's stupid. Courtney Love is a drug-abusing liar; guns and the Second Amendment are perfect; drugs are for weak losers; politics are supposed to be driven purely by the U.S. Constitution; gay people are just people; the very concept of animal rights is a dirty scam; too many Islamists are murderous, homophobic devils; COVID-19 will go down in history as the biggest scam known to man; Kyle Rittenhouse [a then-17-year-old from Antioch, Illinois who fatally shot two men and wounded another in Kenosha, Wisconsin in August 2020] displayed the perfection of good over evil; [former U.S. president Barack] Obama was an America-hating prick, nearly everything [former U.S. president Donald] Trump did benefited America and mankind; and [current U.S. president] Joe Biden is the manifestation of cultural deprivation. I'm a lightning rod because truth, logic and common sense is kryptonite to the politically correct, braindead, soulless cult-of-denial fleebs. Could I be any cooler?"

Ted's comment about Courtney Love appears to be a reference to the fact that she made the shocking allegation during an appearance on a 2004 episode of "The Howard Stern Show" that one of the first times she had oral sex was with Nugent. She said she was young and she didn't want to say exactly how old she was, but eventually confessed she was a 12-year-old — which would have made Nugent approximately 28 years old at the time. Nugent has repeatedly denied the allegation and has never been charged with having sex with an underage girl.

A year ago, Nugent went public with the fact that he was battling COVID-19, saying that he had "never been so scared" in his entire life. The 73-year-old pro-gun activist, who had previously claimed the virus was "not a real pandemic," said: "It was really scary. I didn't think I was gonna make it. I literally couldn't function for about 20 hours, and then they came and they rescued me… The six-foot-two, 225-pound headache [this time] was like nothing I have ever experienced. I mean, from my tip of my toes to the top of my hair, I literally was dizzy and weak and struggled to get up to go to the bathroom. And I would lay in the bathtub a couple of times a day with the water as hot as I could take it just to divert."

Ted also said that he was being treated for COVID-19 by a group of doctors who made a video in 2020 calling for the use of hydroxychloroquine to battle the novel coronavirus, despite warnings from public health experts. Nugent went on to detail his clinical management of COVID-19, saying he was taking hydroxychloroquine, "a proven drug for 65 years," as well as ivermectin, "another proven drug."

In the past, Nugent, a staunch Trump supporter, had referred to the virus as a "leftist scam to destroy" America's 45th president. He had also repeated a narrative pushed by conservative media and disputed by health experts that suggests the official death count from the coronavirus was inflated.

Last fall, Nugent appeared on "Off The Record" where he once again said that he wouldn't take the COVID-19 vaccine because the shots that are available in the United States were developed in less than a year are probably fake.