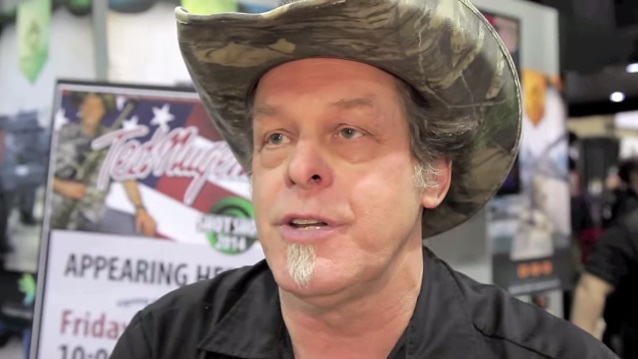 TED NUGENT: 'I Don't Understand' The People Who Hate Me

Controversial rocker Ted Nugent says that he doesn't understand the people that hate him and insists that his "beliefs are so positive and so uplifting that they would work for everybody."

Nugent, who is an avid supporter of gun rights and antagonist of President Barack Obama, was critized this past weekend by fellow rocker Matt Sorum for his widely known love of hunting, after the former GUNS N' ROSES drummer found a photo of Nugent with a small game kill.

Nugent, who is a board member of the National Rifle Association and the owner of a large hunting ranch in Jackson, Michigan, tells Metal Assault in a brand new interview: "People that hate me, I don't understand them. I mean, I understand that hate comes from ignorance and a negative life, but you know what I do, I pray for my haters."

He continues: "What a terrible thing. Why would you hate someone who has done benefits for children's and military charity? I do this every day. You've really got to have a dark, dark heart and sad, dilapidated soul to live to hate like that. So I wish them well and godspeed, and I hope they come out of that terrible dark place they're living in, because I'm a happy, fulfilled man and do everything for my fellow man. I've done more for clean air, soil and water than all my haters combined. I've made mistakes in life but I don't make them twice in a row, I promise you that.

"I feel honored and humbled. I don't have all the answers but I got most of them, and the manifestation of my policies and beliefs are so positive and so uplifting that they would work for everybody."

Nugent in February apologized for referring to President Barack Obama as a "subhuman mongrel," calling that word grouping "street-fighter terminology" and saying he wished he used "more understandable language," such as "violator of his oath to the Constitution."