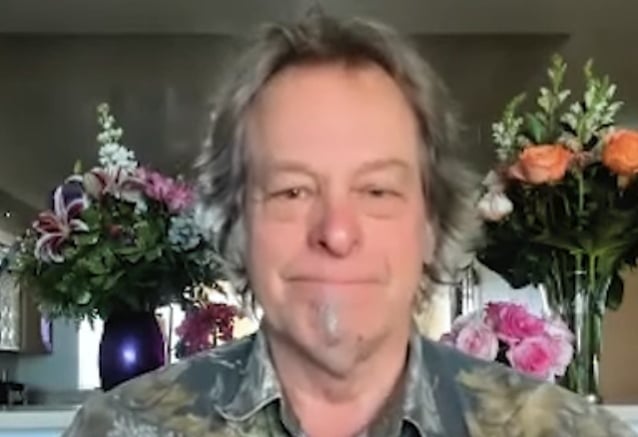 TED NUGENT: 'I'm Not In The ROCK AND ROLL HALL OF FAME Because Of My Politics'

Ted Nugent has once again said that his political views are one of the main reasons he hasn't been inducted into the Rock And Roll Hall Of Fame.

Nugent addressed his exclusion from the Rock Hall during the latest edition of "The Nightly Nuge", a news-style clip in which he offers his take on the news of our world. Asked by co-host Keith Mark about a recent news report that three men, including the curator of the Rock And Roll Hall Of Fame, have been accused of conspiring to sell stolen lyrics from THE EAGLES, Ted said in part (as transcribed by BLABBERMOUTH.NET): "Well, isn't that fascinating, that there's dishonesty and criminal behavior going on within the confines of the Rock And Roll Hall Of Fame?

"My comment on the Rock And Roll Hall Of Fame is I never speak from a personal anger that I'm not in it; I never reference that I should be in it, though obviously I should be in it," he continued. "But that Grandmaster Flash and Madonna and ABBA are in the Rock And Roll Hall Of Fame? I speak on behalf of the fan club of the founding fathers that the Rock And Roll Hall Of Fame should always pay homage to and respect, and that's Chuck Berry and Bo Diddley and Little Richard and Elvis Presley and Jerry Lee Lewis and the founding fathers of this most exciting, throttling, defiant, irreverent, uppity, fun soundtrack in the world. And that they would put people in there that are not just not rock and roll, but they're anti rock and roll. So that this guy is being caught with his hands in the cookie jar is no surprise.

"Let me go ahead and say this… Nobody can sue me because if they try to sue me, we'll prove that my words are accurate," Nugent added. "There's a lot of dope smoking going on at the Rock And Roll Hall Of Fame, and the more dope you smoke, the dumber you get, the more irresponsible you get and the more criminally inclined you will get. And the statistics to prove what I just said are irrefutable, unless you're so stoned that you can irrefute truth, logic and common sense, which I get a big kick out of.

"So this is a spotlight on a cockroach that, unfortunately, represents too much of those in charge of making decisions at the Rock And Roll Hall Of Fame.

When Keith noted that Ted's "politics" are the main reason he hasn't been inducted into the Rock Hall, Nugent said: "Let's examine the foundation of that observation, very accurate observation. I'm not in the Rock And Roll Hall Of Fame because of my politics. My politics are the U.S. Constitution. Thank you very much."

Nugent went on to reiterate his belief that that rappers and non-rock artists like Madonna don't belong in the Hall Of Fame. "I mean, why don't you just piss on Chuck Berry's grave, you know what I mean?" he said.

According to Ted, the fact that both Patti Smith and Grandmaster Flash have been inducted into the Rock And Roll Hall Of Fame is the result of "political correctness," which he calls "a self-inflicted and embarrassing scourge." He added in a mocking tone: "Yeah, Grandmaster Flash is rock and roll. And I'm a gay pirate."

In July 2021 e-mail from NRA general counsel John Frazer sent to board members, it was announced that Nugent, who joined the board in 1995, was stepping down "due to ongoing schedule conflicts."

Ted's decision to leave the board came less than a year after he told Newsmax's "The Chris Salcedo Show" that the National Rifle Association was "the most important civil rights organization in the world."