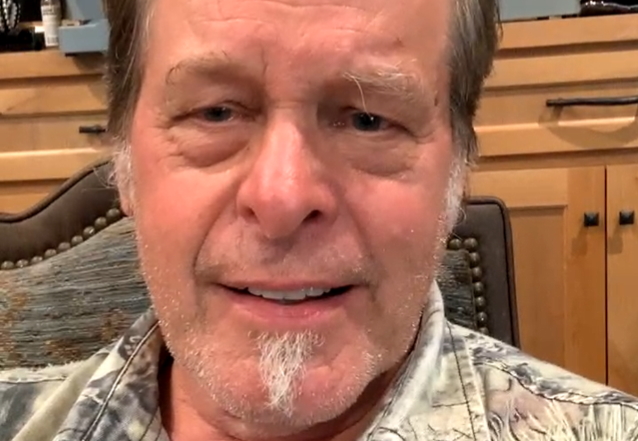 Ted Nugent has weighed in on the latest in a spate of deadly U.S. mass shootings, saying "this kind of stuff could be stopped."

On Wednesday, a California transit employee killed nine co-workers before taking his own life. Authorities said Thursday they recovered three handguns following the rampage at the Santa Clara Valley Transportation Authority (VTA) property in San Jose, rather than two they initially said the gunman carried.

A board member of the National Rifle Association, Nugent addressed the San Jose killings during a Facebook Live stream earlier today (Thursday, May 27). He said in part (as transcribed by BLABBERMOUTH.NET): "I see all these news reports… News reports — they're not news reports; they're propaganda explosions.

"So there's a shooting in San Diego [sic] by a guy who has been reported to the government officials numerous times that he rapes his wife, he rapes his ex-wife, he has stated numerous times to the people in his life, 'I wanna kill people. I'm really upset down there at the VTA, Valley Transit Authority [sic]. I'd like to kill those people.' And so the people who heard these threats of violence called the people in charge, people with authority… And right away, the news goes, 'He probably used one of those assault weapons, those military assault weapons, to kill that many people.' No, he used two handguns. The San Diego [sic] shooter used two handguns. 'Well, where did he get 'em?' I don't know. Ace Hardware? Or the same place that the Crips and Bloods get 'em. Or maybe the MS-13 get 'em. Maybe they got 'em from Eric Holder [former Attorney General of the United States] and Barack Obama [former president of the United States]."

Nugent continued: "See what's going on here? This propaganda ministry in the United States Of America has brainwashed so many feeble, comfortably numb, braindead, soulless punks that they believe this shit.

"Hey, Mr. Newscaster, he didn't use an AR-15 — he had two handguns. And you know how he killed all those people? It was freakboy Biden's dream. It was David Chipman's dream where these people died, just like in every instance where the most innocent lives are lost," he said, referring to President Biden's choice to lead the Bureau of Alcohol, Tobacco, Firearms and Explosives (ATF). "It's in David Chipman's dream, it's in Sarah Brady's [former prominent advocate for gun control in the United States] dream, it's in Barack Obama's dream zone of gun-free zones. And we still accept it.

"Tell your mayor, your senator and your congressman and your governor every fucking day that the most innocent lives are always lost in gun-free zones. The guitar player can fix that. End gun-free zones.

"My fellow Americans, you wanna save lives? Uncle Ted's got the answer. Get everybody in your life to make sure they don't drink and drive. Make sure they don't buy chemicals that destroy their brain and eat enough food to turn 'em into sperm whales. That's how you save lives.

"I can give you the list of causes of death in this country, and it eclipses the Chinese virus.

"Get rid of gun-free zones. Eat like you have a brain and a conscience. Respect your sacred temple by stop poisoning it. And raise absolute living hell with your government punks who have been ignoring us for too long.

"I have the right to protect my sacred gift of life — period — on planet Earth. Thank God America has a Second Amendment 'cause it's the only place that does. And if you got rid of all the violent Democrat-controlled cities, we wouldn't be in top one hundred of crime with firearms in the world. If you got rid of Chicago and Detroit and San Francisco and Baltimore, if you got rid of all the Democrat-run gun-free zones, America wouldn't be in the top one hundred of slaughter zones of the world. Because the Democrats like you to lose control and to be unarmed and helpless. What a curse. What a demonic decree. That another man can possibly tell you, 'No, I'm afraid you can't defend yourself in these areas.'"

Gun-free zones are areas where firearms are federally prohibited with or without a permit. Critics of the legislation have said that mandating gun-free zones announces to the bad guys that it's open season on law-abiding citizens.