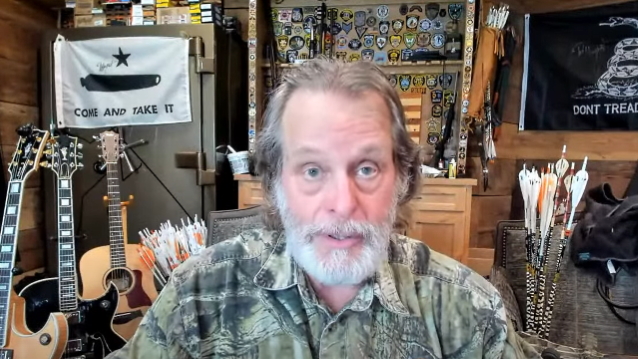 TED NUGENT On Transgender Women Competing On Female Sports Teams: 'It Is The Work Of Satan'

Ted Nugent has spoken out against the participation of transgender women in female sports, calling it "the work of Satan" and "absolutely unacceptable."

Last summer's Tokyo Olympics were the first to see publicly out transgender athletes compete. According to ESPN, Laurel Hubbard, a weightlifter from New Zealand, and Chelsea Wolfe, an alternate on the United States BMX team, became the first transgender women to qualify for the Olympics. Canadian soccer player Quinn and American skateboarder Alana Smith became the first out non-binary athletes to compete at the Olympics.

Hubbard's participation as a trans woman in the Summer Olympics was met with controversy, with critics saying her eligibility was a threat to fairness in sport.

Nugent addressed the hot-button issue during a recent episode of "The Nightly Nuge", a news-style clip in which Ted offers his take on the news of our world every night "in a concise, fiery fashion that [is] totally Ted." The outspoken conservative rocker said (as transcribed by BLABBERMOUTH.NET): "This transgender atrocity is a manifestation of cultural deprivation the likes of which I don't believe mankind has ever experienced, much less the soullessness, the rot, the evil, the mean-spiritedness, the cruelty that could ever support a man beating women's records, much less a biological man entering a woman's locker room or a girls' bathroom at a high school to perpetrate rape or molestation. This is happening. This is absolutely unacceptable. It is the work of Satan. It is the work of evil."

He added: "Conscientious, empathetic, passionate, compassionate, sensible, decent human beings know that this is an atrocity. We have got to eliminate this. This is just a self-inflicted curse of pure rot being unleashed upon the American public. And I'm afraid it's gonna be a global phenomenon."

Ted previously touched upon the decision to allow Hubbard to compete in the Olympics during a May 2021 Facebook Live session. At the time, he said: "I heard the story of the world record holder weight-lifting champion which was born a man was allowed to compete against women. See, there's a manifestation of a cultural abandonment the likes of which I don't think we've ever seen before — where a man gets to go, 'I feel like a woman so I'm gonna compete against the women.' Then they set world records in athletic events because they're a man competing with women. And some dirtbag would go, 'Yeah, that's perfectly legitimate. That makes perfect sense.' Because women can't lift as much as men, so the man who claims he's a woman — he's not a woman; the penis might be an indicator. And he sets world records in athletic competitions where a man is competing against women. And some mindless dirtbag goes, 'Well, that's legitimate. That's good.'

According to ABC News, experts have said that there is no evidence that trans athletes are disproportionately dominating sports that correlate with their gender identity or that they have an advantage in their sport.

Dr. Eric Vilain, a geneticist who studies sex differences in athletes, told NPR in March 2021 that testosterone affects performance in only a very small number of athletic disciplines and doesn't provide any advantage.

Transgender Athletes And TheIr Impact On Fairness In Sports

As the Olympics put a spotlight on Men’s and Women’s global athletic competition, here in America there is a battle to integrate transgender athletes. Ted makes his position clear and you need to hear why he feels the way he feels. TNN anchor, Keith Mark, wonders aloud where feminists and the NCAA stand in regards to fairness.

Posted by The Nightly Nuge on Tuesday, February 8, 2022