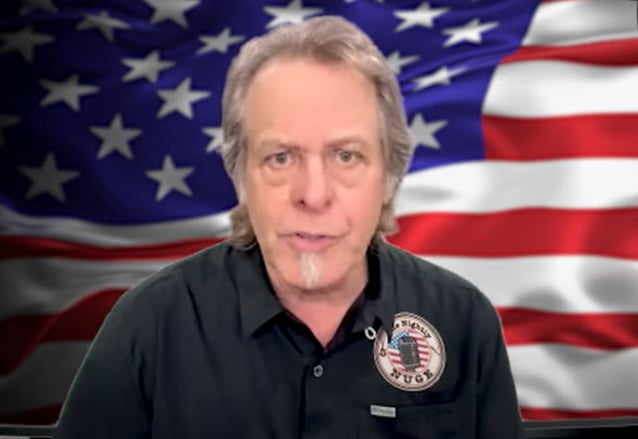 TED NUGENT Says JOE BIDEN Is A 'Mindless, Soulless Zombie' Who Is Being Controlled By 'An Evil Force'

Ted Nugent has compared Joe Biden to Adolf Hitler following a speech the U.S. president made earlier in the month.

During his September 1 address, Biden attacked former president Donald Trump and his Make American Great Again (MAGA) supporters, saying that both posed an ongoing threat to America and the future of the country.

But MAGA world was focusing less on Biden's warning than they were on the red lights that lit up Philadelphia's Independence Hall behind the president.

Nugent addressed Biden's speech during the latest edition of "The Nightly Nuge", a news-style clip in which he offers his take on the news of our world. Asked by co-host Keith Mark what he made of the "overall look and feel of what America saw" in Biden's speech, Ted said (as transcribed by BLABBERMOUTH.NET): "Well, I paid attention to history, in spite of the fact that I went to an American anti-education system. Because when I graduated in 1967, I knew nothing. I knew how to sneak up on a deer and a squirrel with my bow and arrow. I knew how to do chores perfectly; my mom and dad trained me that. I knew how to be polite, how to be productive, how to get up early and put my heart and soul into being the best that I can be. But I didn't know anything about history. I couldn't have told you what Auschwitz was. I couldn't have told you what the Rape Of Nanking was. I couldn't have told you who Karl Marx was, or Che Guevara, but I know now. And I'm gonna [share with you] an image of Hitler, Joe Biden, the evil tyrant of China, Karl Marx — evil, evil forces in history that also used a red glowing background in their hate speeches."

Nugent continued: "There is an evil force controlling this mindless, soulless zombie named Joe Biden that is so confident that Americans can be so stupid and uneducated and clueless about history that they won't see the confluence of imagery, gestures — I mean, the clenched fist like Adolf Hitler, like Mao Tse-tung, like Lenin and Marx. Joe Biden is evil unto himself, but he is so mindless, so soulless, so filled with hate and rage that he doesn't even know he's doing the bidding of Satanic, evil forces."

Asked who he thinks those forces are, Ted said: "I think they're Klaus Schwab [founder of the World Economic Forum] and they're Bill Gates [Microsoft founder] and they're the Chinese forces, the communist forces. Nancy Pelosi's bank account, Joe Biden's bank account, Hunter Biden's bank account tell all the information that we need to know. They didn't earn that money; they scammed that from working-hard, playing-hard American families to support evil forces around the globe to control our land, our farming, our agriculture, our food productivity, our energy productivity, our infrastructure. I mean, in Detroit, their number one steel mill is owned by the Russians [laughs], and all this farm land is being gobbled up by Bill Gates and the communist Chinese because there's really no difference between the evil mindset of those kind of globalists."

Ted's comments echoed descriptions of Biden on right-win media outlet Fox News where the network's highest-rated anchor Tucker Carlson — whom Nugent has previously praised as "a brave, ass-kicking, wall-destroying, lie-crushing guy" — came out and described the visuals as "a blood-red Nazi background." On another Fox News show, Monica Crowley, a former Trump administration official, said the imagery was "almost satanic with the blood red lighting." Others characterized Biden's address as a demagogic, divisive, and authoritarian attack on his fellow citizens, suggesting the president and Democrats, as opposed to Trump and his allies and supporters, were the real American would-be fascists.

This is not the first time Nugent has been publicly critical of Biden. Last year he declared Biden a "rotten" human being and railed against Democrats who support the president's "ugly policies." He said during an appearance on "The Wild Initiative" podcast: "You say that some of the liberals have good intentions. I haven't met one. And I meet an awful lot of people. Because if you are on the side of Joe Biden, you're just plain a rotten human being. You support a man with a liberal agenda that renegotiated all the contracts with the globe that Trump finally negotiated on behalf of our country. That's not my hunch; that's not a guess; that's not an opinion. Trump renegotiated global contracts for the first time in my lifetime to actually benefit America, and Joe Biden reversed them to hurt America. So if you're a liberal and a Democrat, you're the enemy of freedom. And if you don't believe in those ugly, ugly policies, then you have to quit."