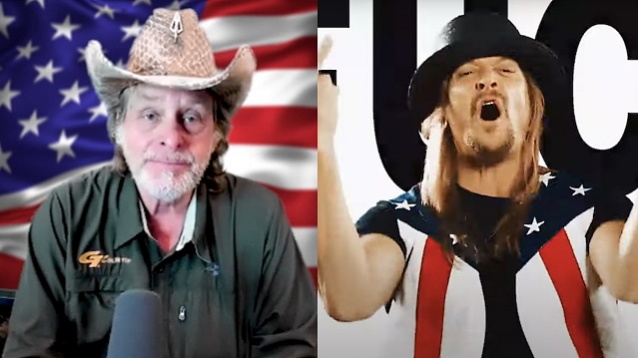 In a new interview with retired boxer David "Niño" Rodriguez, Ted Nugent was asked why he hasn't yet collaborated on music with fellow outspoken conservative rocker Kid Rock. Ted responded (as transcribed by BLABBERMOUTH.NET): "Kid Rock and I communicate. In fact, he plays [the Nugent song] 'Cat Scratch Fever' [in concert] every night.

Nugent added: "I think being raised in the Motor City, I would like to think, since [Kid Rock] likes really soulful, pounding, grinding music — hello? — I think he might have been paying attention to Uncle Ted over the years, and that's why he's got his middle finger on fire. Because he's an entrepreneur, he has a great work ethic, he is really unbelievably creative in his art, he surrounds himself with virtuosos and other creative entrepreneurial-type individuals, So that's the world I live in, that's the world you live in, that's the world Kid Rock lives in, that's the world all the people in the asset column… People who get up early — that rush hour, pain the ass, they do it every day because they wanna be in the asset column for their family. So Kid Rock and I share that middle finger of independence. And the most important thing on the planet: critical thinking. Anything status quo or standard operating procedure must be scrutinized and you will learn to dismiss it. 'Cause everything status quo is horrible for the American Dream. And that's what Kid Rock represents."

Nugent and Kid Rock got to spend some time in the Oval Office with then-U.S. president Donald Trump in April 2017. They were joined by Sarah Palin, the former Alaskan governor and GOP vice presidential nominee, who posted photos of the visit on social media the following morning. Nugent later told the Detroit Free Press that he and Kid Rock represent a salt-of-the-earth American demographic that helped Trump land the presidency.

In the past, Nugent, who battled COVID-19 last April, had referred to the virus as a "leftist scam to destroy" former U.S. president Donald Trump. He had also repeated a narrative pushed by conservative media and disputed by health experts that suggests the official death count from the coronavirus is inflated.

Kid Rock's new single, "We The People", features the chorus of "Let's go, Brandon," conservative code for "Fuck Joe Biden" (born when a NASCAR reporter misheard a crowd, reporting that they chanted in support of racer Brandon Brown when they were actually chanting expletives toward the U.S. president),and also takes aim at the mainstream media, CNN, TMZ, Twitter and Facebook, as well as mask mandates and COVID-19 restrictions.