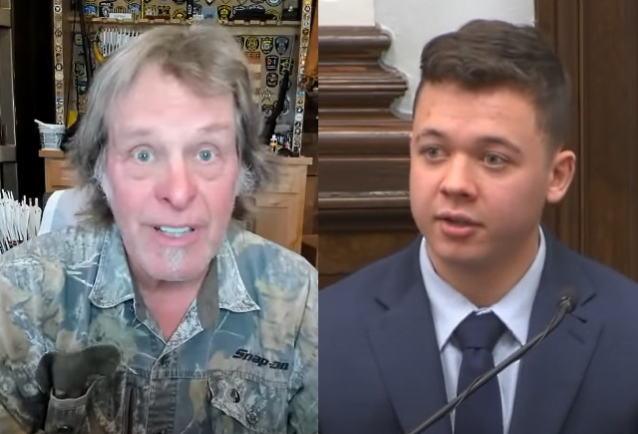 Ted Nugent has defended Kyle Rittenhouse, the teenager who fatally shot two people in August 2020 during unrest in Kenosha, Wisconsin, saying he "did everything right."

Rittenhouse, 18, is on trial for reckless homicide in the slaying of Joseph Rosenbaum, 36, and intentional homicide in the death of Anthony Huber, 26, on August 25, 2020, during unrest that followed the shooting of a black man, Jacob Blake, by a white Kenosha police officer. Rittenhouse, a then-17-year-old former police youth cadet, said he went to Kenosha to protect property from rioters. He is facing life in prison if convicted of the most serious charge against him.

Nugent weighed in on the Rittenhouse trial this week, taking aim at the prosecutors and insisting the teenager acted in self-defense. Speaking to Eric Bolling, the host of Newsmax's "Eric Bolling The Balance", the outspoken conservative rocker said (as transcribed by BLABBERMOUTH.NET): "That this court case even exists is a manifestation of cultural abandonment in America. The prosecutor — pure rot. The rioters — rotten human beings; just nasty, nasty thugs.

"Kyle Rittenhouse, I'm sending him a lifetime supply of good ammo. This guy, this young 17-year-old kid was exactly what the founding fathers wanted all Americans to be — to stand up good over evil. Kyle Rittenhouse — good; rioters and thugs and attackers and assaulters and career criminals — evil.

"Our court system, our totally failed court system is intentionally engineering recidivism," Nugent continued. "They know these people are gonna repeat their vicious, violent crimes, and the so-called justice system continues to let them out to do it. And when a good citizen stands up and goes, 'No. I have an instinctual moral obligation to try to neutralize evil,' this court case happens and it breaks the hearts and sickens good Americans that know the purest instinct to man is to defend oneself. And that's all Kyle Rittenhouse did.

"I'd just like to salute Kyle Rittenhouse. What a tactically trained young man. He did everything right. And our society is coming down against good, and these numbnuts are supporting evil.

A jury is deliberating the charges against Rittenhouse, who is white, as were the three men he shot.

During two weeks of trial, Rittenhouse took the stand in his own defense and said he opened fire because he feared for his life. "I did what I had to do," he told the court. According to Time, his attorney claimed Rittenhouse was justified in his actions and that he "didn't shoot at anyone until he was chased and cornered." But prosecutors said none of the men who Rittenhouse shot posed imminent threats. Instead, they say Rittenhouse lost the right to claim self-defense because he provoked the attacks and created his own danger when he brought a semi-automatic rifle to the protests, crossing state lines from Illinois to do so.