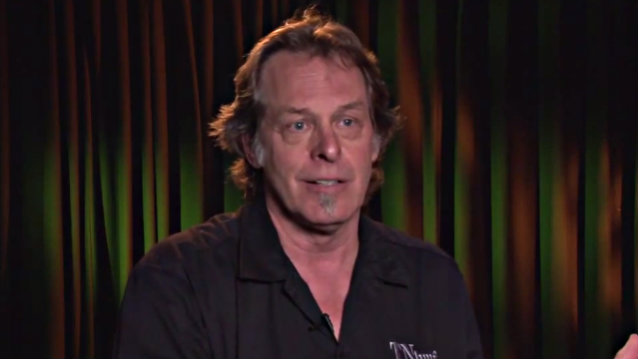 Legendary rocker Ted Nugent recently spoke to Radio.com about his new album, "Shutup&Jam!", why his enemies are like the chimps in "Planet Of The Apes", his take on John Lennon's "Imagine", and why RAGE AGAINST THE MACHINE's Tom Morello is actually a conservative.

"I love the guy, he's incredibly gifted, a gentleman for the most part, but he's weak. He's weak. And he doesn't understand the concept of the [body as a] Sacred Temple. He doesn't understand accountability. He doesn't understand — clearly — how his indulgences and his poisons ruin his life. And his relationships, and his marriage. And his musical capabilities. I love the guy and if he's watching this, I love you, but when you're the drunk Sebastian Bach, you're nowhere near the Sebastian Bach that you are when you're clean and sober. Case closed. That isn't a Ted Nugent opinion, that's scientific truism."

On his drummer Mick Brown, who got a DUI a few years ago backstage at one of Ted's shows:

"Well, he had a couple of beers and went on a golf cart ride! Whoa! Let's crucify him! That's no big deal! Even I can look the other way for that! I have zero tolerance for dangerous criminal behavior that compromises the music. It was the last date of the tour. He watched me get up on stage with Tommy Shaw and the STYX guys and we played a DAMN YANKEES masterpiece, 'Coming Of Age'. I can understand how anybody could lose control of themselves under that musical jihad. It was a very powerful musical moment. It was very magical and I think he did a couple of extras, saw some good-looking chicks with short skirts… I don't bemoan his decision. A golf cart and two pretty girls? It was harmless."

"Tom Morello claims to be an ultra-liberal. But let's examine Tom Morello's life, shall we? He works really hard. He gets up early. He puts his heart and soul into being the best craftsman he can be. Provides for and protects his family. He's true to his family. So far, he sounds an awful lot like Ted Nugent. [My new album] 'Shutup&Jam', if it's a shout-out to anybody, is probably a shout out to my good friend Tom Morello. Because we talk politics, and we should do it on film sometime, it's quite telling. Because the typical liberal, when they attempt to debate me, always ends up with a very predictable statement: 'Yeah, but still…' If you give people stuff, dependence will be the result. If you give a beggar money, you're helping to kill him! Because he will spend that money while you lie to yourself and feel good, you've actually expedited the death of that individual, because he will buy dangerous deadly things with that money! You gotta be kidding me! If he wants a sandwich, give him a sandwich! That's not what he wants! My point being: Tom Morello, I love him dearly, I respect his musical genius, and I respect him as a man. And when it gets time to have a legitimate political debate, we remain civil and gentlemanly, and eventually we can both shut up and jam because we both come from the Chuck Berry school of uppity, spirited, freedom-drenched American rhythm and blues."

In a 2012 interview with Metal-Rules.com, Bach stated about Nugent, with whom he appeared on "SuperGroup", the 2006 VH1 "reality" TV program also starring ANTHRAX guitarist Scott Ian, ex-BIOHAZARD bassist/vocalist Evan Seinfeld and drummer Jason Bonham (LED ZEPPELIN, BONHAM, UFO, FOREIGNER): "To be honest with you, I think that Ted's political beliefs and social opinions overshadow how great a guitar player he is. More people know Ted for his outrageous views and political viewpoints. His music is so great, but a lot of people are disgusted by him. They don't like guns. People don't like racism, but he says some things that are from the Fifties. People don't think like that anymore; it's not acceptable. It's a shame because I love his music and he is funny as hell. He is so abrasive with his beliefs, it takes the fun out of it."