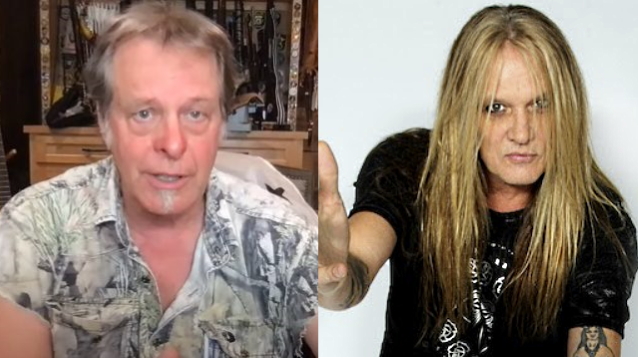 TED NUGENT: SEBASTIAN BACH 'Wants To Be More Of A Pop Star Than A Music Guy'

DAMNOCRACY was featured in the 2006 VH1 "reality" television show "SuperGroup". The premise of the series, which was filmed in February and March 2006, was to lock several musicians in a house for 12 days and get them to write and record some new original music. In addition to the five musicians, manager Doc McGhee (KISS) was in charge for the duration of filming/recording. The all-star band also performed a headlining set at the Empire Ballroom in Las Vegas.

Asked why DAMNOCRACY never continued beyond the TV show, Ted said (as transcribed by BLABBERMOUTH.NET): "Sebastian Bach, I love the man, but what a goofball. He is so dedicated to hiding from Sebastian Bach. I mean, he's made some really nasty, stupid falsehoods against me. [Laughs] And I still love the guy; he's gifted with one of the most amazing voices in the history of the world. But his propensity to scramble to escape himself with the drugs and the alcohol. It's a self-inflicted curse I've just witnessed my whole life that is inexcusable.

"DAMNOCRACY — Jason Bonham, monster talent. Great man, work ethic, And all the guys… Scott — super human," Ted continued. "Super musical force. All of 'em — fun to be with. Even Sebastian, even though he was always losing it. But it was fun. And it didn't happen because it was too programmed.

"With those powerful talents — [Evan], Jason, Scott and all of us — we loved the music. We wanted to make music. I think in the case of Sebastian, I think he wants to be more of a pop star than a music guy. And so he was like a kid in a candy store surrounded by all these musical forces. And, again, he's a musical force. It's just that he tends to go on the transparent, poppy rock and roll star side. And if you wanna be a rock and roll star, you're not gonna be. If you wanna make great music, you're probably gonna be a rock and roll star. Big difference.

"I've played Jason since then, and I've spent time with Scott since then," Nugent added. "Great guys, and it was fun. But I can't go to a city and produce a TV show like that ever again. It's just too much hurry-up-and-wait stuff."

Bach previously addressed his involvement with DAMNOCRACY during a 2019 question-and-answer session at the Fanboy Expo in Knoxville, Tennessee. Asked if there were any proper DAMNOCRACY recordings available to be released, Bach said: "That session exists on my laptop. Ted Nugent didn't wanna make that a real thing. He's got way too many animals to kill. On top of his list are squirrels, rabbits, birds. Get 'em all. That's important. You can't go buy one at the store; you've gotta kill your own. I'm not against that, but… you know. I remember when he focused on the music more than that. That was the Ted I listened to. I've gotta go kill squirrels, grandpa. And then post a picture with a little kid, and the kid's like this [gives a horrified look]. 'I don't wanna kill a buddy.' Like, God, chill out on the murdering, dude. Ease up on the murders." He then added: "Okay, I'm gonna get in trouble for everything I just said."

Back in June 2006, DAMNOCRACY released rough demo versions of three songs — "Take It Back", "UltrAlive" and "Edge Of The World" — on the band's MySpace profile. At the time, Bach said that it was "more than a little frustrating to watch the show and see little to no footage of the band actually playing music. When I say on the show, 'Well, we jammed for six or seven hours today,' but they show none of it, it drives me nuts!" he explained. He added that the demos were "extremely low quality" with "zero production" and predicted that "f we ever cut these tunes, they would probably sound nothing like these demos."

In his 2016 memoir, "18 And Life On Skid Row", Bach wrote about how Nugent, whom he considered to be one of his musical idols, allegedly went on a racist tirade on the set of "SuperGroup", causing Sebastian to step into the role of unlikely hero to the African-American crew by walking out and going to the producer, refusing to continue working with the Nuge.