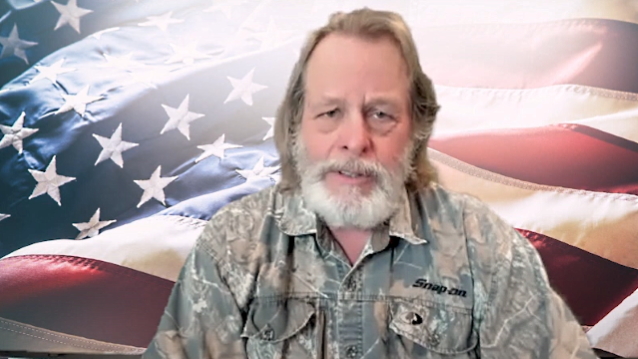 TED NUGENT: 'Ukraine Is Not An Innocent Player Here'

Ted Nugent has suggested that Russian president Vladimir Putin was forced to act in Ukraine in order to impose neutrality on Russia's neighboring country, in the process preventing it from joining NATO to stop it from posing a threat to Russia's national security.

Nugent weighed in on the situation in Ukraine during today's (Monday, March 21) edition of "The Nightly Nuge", a news-style clip in which Ted offers his take on the news of our world every night. Speaking about whether the United States and the West invited this war with their support for admitting Ukraine into NATO, a step that Russia finds unacceptable, Ted said (as transcribed by BLABBERMOUTH.NET): "I would like to think that Putin, the murderous punk that he is, the tyrannical monster that he is, historically has to have the same security on his borders [as I do on my personal property], and when the NATO countries threaten to be right on his doorstep, he has to respond.

"Let me put it in simple terms. I spoke to some real heroes, boots on the ground in the Ukraine," Ted continued. "Ukraine is not an innocent player here. Putin is clearly a guilty player here.

"So, our prayers are with those poor families in the Ukraine who just wanted to have a semblance of quality of life and justice and good will and decency, who are now escaping with the clothes on their back to Poland and elsewhere, NATO members.

"I don't trust NATO, I don't trust Putin, I don't trust [Ukrainian president Volodymyr] Zelensky, and I sure as hell don't trust [U.S. president] Joe Biden or the Department Of Defense," Nugent added. "The whole hellraising about the military industrial complex I dismissed for many years; now it cannot be dismissed. These monsters are playing their games to enrich their inner core, and that's the real horror that's unfolding before our very eyes because of the Russian invasion of the Ukraine."

Last week, Nugent said in an interview with Eric Bolling, the host of Newsmax's "Eric Bolling The Balance", that Russia's invasion of Ukraine would not have "happened under [former U.S. president] Donald Trump because he always negotiated to make America stronger, make America safer, make peace through superior firepower, not just in hardware but in 'heartware,' in mindset, in spirit, in attitude and actions.

"So, America is so pissed off right now, their frustration level and pain and suffering is palpable," he continued. "But number one, everybody's praying for the innocent citizens in Ukraine. We know that the Ukraine government is corrupt and we know that Putin is a monster, but mostly I've gotta tell you, Eric, as concerned as we are about those innocent victims over there, we are just aghast that we don't secure our borders, that we don't stop the flow of fentanyl into our country, killing more Americans than [there] are Ukrainians dying. That the anti-gun people in this country are going berserk trying to disarm Americans while they celebrate the distribution of Kalashnikov machine guns to the people of Ukraine. They literally can't have it both ways, but they're so dishonest, so corrupt, so out of their minds and soulless that it's really exposing them to what used to be the middle ground. The moderates in America, they're starting to see the level of indecency and hypocrisy and dishonesty and abuse of power by our own government."

In the past, Nugent, who battled COVID-19 last April, had referred to the virus as a "leftist scam to destroy" Trump. He had also repeated a narrative pushed by conservative media and disputed by health experts that suggests the official death count from the coronavirus is inflated.