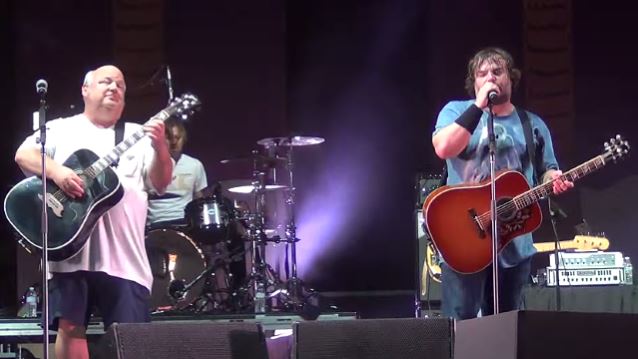 TENACIOUS D was honored with a Grammy in the "Best Hard Rock/Metal Performance" category in the pre-telecast ceremony at the 57th annual Grammy Awards, which is being held tonight (Sunday, February 8) at the Staples Center in Los Angeles. TENACIOUS D was nominated for its cover version of the DIO classic "The Last In Line", from the "Ronnie James Dio - This Is Your Life" tribute album.

MASTODON – "High Road"
Track from: "Once More 'Round The Sun"
Label: Reprise

TENACIOUS D – "The Last In Line"
Track from: "Ronnie James Dio - This Is Your Life"
Label: Rhino

"Ronnie James Dio - This Is Your Life" was released in April 2014 via Rhino.

"Dio was the master," Jack Black of TENACIOUS D told Music For Good. "He was the Pavarotti of heavy metal vocalists. [He had] soaring melodies and a lion's roar to match. He was also one of the coolest guys I've ever had the honor of meeting. No one could touch his brilliance… on or off the stage."

"It's hard not to pick a great Dio track… but this one appealed to us," Kyle Gass said of "The Last In Line". "Recording the track was a blast. Our electric guitarist, John Konesky, shredded a solo. I said, 'That's pretty good, but let's try out my recorder.' Lo and behold, it shredded even more and added a unique element to the track."

Gass fondly remembered Ronnie's cameo in TENACIOUS D's musical comedy film "The Pick Of Destiny", telling Music For Good: "Dio obviously has been a major influence and inspiration for the D. His performance in 'The Pick Of Destiny' was a magical moment for us, and we'll always miss him. Rock on, Dio."

Final ballots went out on December 17, 2014, and were due on January 16, 2015. After the final tabulation of votes, winners' names — in 83 categories in 30 fields — remained confidential in sealed envelopes until the 57th annual Grammy Awards.