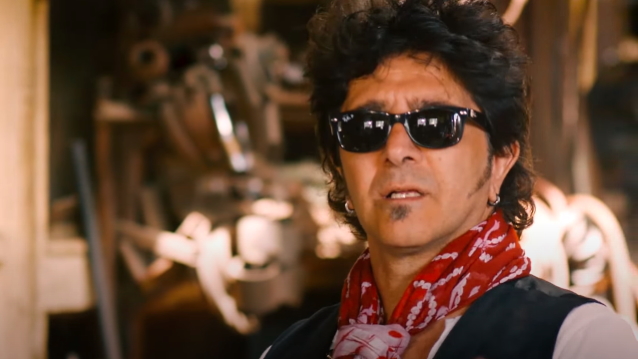 TERRY ILOUS On Getting Fired From GREAT WHITE: 'I Was Completely Taken By Surprise'

Ex-GREAT WHITE singer Terry Ilous says that he was "completely taken by surprise" by his dismissal from the band.

Ilous discussed his exit from GREAT WHITE during a new appearance on Waste Some Time With Jason Green. Asked if the release of his 2017 solo album, "Gypsy Dreams", created any tension between him and the rest of the band, Terry said (as transcribed by BLABBERMOUTH.NET): "I started working on that album in 2016. And I always told the band I was working on the album. There was nothing to hide. Why would anybody have a problem with a bandmember releasing a solo album, especially if it's not the same type of music anyway? I come from the school where it's good to do other things; you have to branch out. I've worked with a lot of different musicians… I've worked with a lot of different people in my career — as a backup singer or voiceover or whatever — so, for me, it was no big deal. And I asked the band's permission, I said, 'Is it okay?' And they said, 'Yeah, yeah, you can do your own thing.' [And I said] 'Great. Fantastic.' So we are in 2016. I do a GoFundMe kind of thing, to raise money for the album. And all of a sudden, toward the end of 2016, the band says to me, 'GREAT WHITE's gonna do a new album.' I'm, like, 'Oh, really? Okay. So let's get ready to write.' So I went back and started writing songs and everythiing. At the same time, I was finishing my own album. And then I made an announcement, my album's gonna come out May 15th, and the band has a meeting with me and says, 'You can't release your album.' I'm like, 'Why?' 'Well, you can't release your album because we're gonna release our album at the end of the month.' I'm, like, 'What should I do?' 'You can't release it.' And that was it. So that created a big stigma in the band, a big issue, especially because the band I was working with [for my solo album consisted of] mostly Latin people. So it was a problem, I'll put it this way, and that started to create issues between myself and the guys in the band. Not everybody in the band, by the way, but some people in the band were upset about that."

According to Ilous, he always made it a point to tell people that his primary focus was GREAT WHITE and not his solo career. "I was doing a lot of interviews, and I always said one thing, I said, 'I am the lead singer of GREAT WHITE. My priority is GREAT WHITE,'" he said. "I always made sure to say that, 'cause sometimes people can misinterpret what you wanna say. So I said, 'No. I am the lead singer of the band GREAT WHITE. My priority is GREAT WHITE. I'll be touring with GREAT WHITE. And if the band is not touring, then I will be doing that on my own. And that's it.' And that is the truth. But apparently someone got upset. I was touring, and eventually one day, I received an e-mail saying, 'Thank for for a great service. You're a great singer. Have a good life.' And that was it."

Terry said that he "had no idea at all" that he was going to be replaced. "Last time [I played with GREAT WHITE], we did a string of sold-out shows," he recalled. "In fact, one of the last shows we did was actually on a Thursday in Wisconsin. We did a summer fest, and there were 10 thousand people [there]. The crowd went crazy — 10 thousand people going nuts. And that day I sang so well. You know, sometimes you sing better than other days — that's the way it is as a singer — but that day I was really good. Not to be pretentious, but I was happy. I was, like, 'Ah, man. Great performance.' Friday and Saturday, we did two other shows — one in Las Vegas. We did a show with SLAUGHTER, and everybody gave me a big hug. 'Hey, brother, see you next week.' That's the last time I talked to anyone in the band. On Monday morning, I get an e-mail… The leader of the band, Mark [Kendall, guitar], sent me the e-mail, but it [was] on behalf of everybody in the band. 'We think that you should be replaced by somebody else. And we wish you the best.' The e-mail was polite. 'Good luck to you. You will have no problem finding another band. Please don't say bad things about us. We will never say bad things about you.' And that was it."

In May 2019, Kendall told the "Music Mania" podcast that he and his bandmates felt that Malloy was a more suitable vocalist for GREAT WHITE than Ilous. "We feel like Mitch is a little bit better fit, not only image-wise but vocally," he said. "He delivers the songs in a way that's just more like the original. We don't wanna reinvent the songs. When we write new stuff, that's a different story. But you wanna deliver the hits well. People come down to hear that."