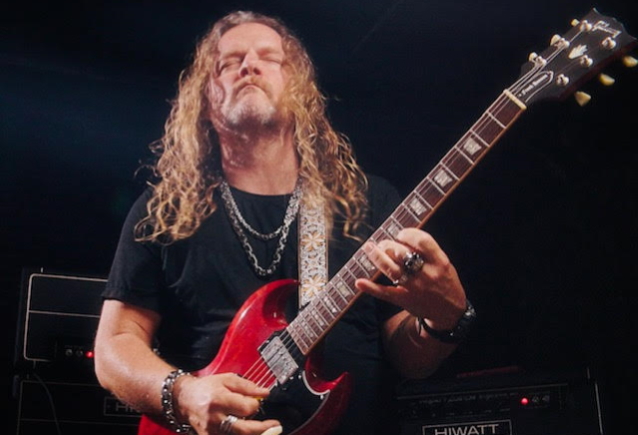 TESLA guitarist Frank Hannon has released the official music video for his new instrumental song "Octopus". "Octopus" is a jazz rock fusion instrumental song that features Hannon improvising spontaneous jazz-inspired bass lines to start, then he incorporates his experience as a producer/recording artist to perform by overdubbing piano, organ, drums and ultimately a blistering electric guitar solo to create a unique mix of rock, jazz and fusion music.

Known primarily as a founding member of the multi-platinum rock band TESLA, Hannon is also a multi-instrumentalist, producer and recording engineer who has produced many younger up-and-coming artists as well as TESLA singles and diverse solo albums.

Hannon states: "I have a very eclectic taste for different styles of music and I started learning to play the organ at five years old with my grandmother, then drums at 10 before falling in love with guitar at 12 years old in 1978. At 15 years old, I got a four-track recorder tape machine and learned that if you want to record well, it's important to understand the role of bass guitar and how all the instruments fit together in recordings. I used a four-track cassette machine to learn how to record overdubs. Since then, I've built studios over the years to record bands and albums.

"This new 'Octopus' song is a sample of my love of the art of recording and capturing 'improvisation' as a way to create interesting music as a solo artist. I couldn't think of a title for it until I saw the movie 'My Octopus Teacher' which made me fall in love with the extreme intelligence and diversity of the amazing animal known as the octopus."

Be sure to visit www.frankhannon.com for limited "Octopus" merchandise and gift box ideas in time for Christmas.

Next year, TESLA will return to Las Vegas for a special five-night residency, in celebration of their 36 years of entertaining rock audiences around the world. "TESLA: The Las Vegas Residency" will kick off Friday, March 17, 2023 inside House Of Blues Las Vegas at Mandalay Bay Resort and Casino on the famed Las Vegas Strip.

In September 2021, drummer Troy Luccketta announced that he would "take a little time from the road" to spend with family and friends. He is being temporarily replaced at TESLA's gigs by Steve Brown, the younger brother of former DOKKEN drummer Mick Brown.

Originally released in August 2021, "Cold Blue Steel" was the first TESLA song to ever be produced by the bandmembers themselves.