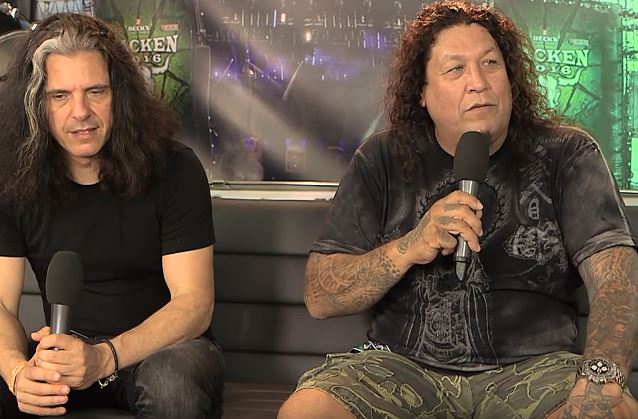 TESTAMENT's 'Brotherhood Of The Snake' Was 'Probably The Most Difficult Record We've Ever Done,' Says CHUCK BILLY

On writing "Brotherhood of the Snake":

Chuck: "It was a long time, about a year and a half process. Between Eric [Peterson, guitar] creating the music and me creating the lyrics or the melodies, there's a lot of times where I was frustrated with him, or he was frustrated with me. It was probably the most difficult record we've ever done. But I think, at the end of the day, it's one of the most creative ones, actually. Maybe it was because we had so much time with it. Like they say — anything comes that is good isn't easy. That's how it works. I'm proud of it. Me and Eric, we've had our battles for a year and a half. But at the end of the day, we're high-fiving. It's all good."

On Billy's battle with cancer:

Chuck: "I've seen a few medicine men. I have some wild stories. I have a friend that we grew up with in the Bay Area and she moved to L.A. We saw her after a show at the Rainbow and she told me: 'I had a dream that you and Charlie were sitting around a fire putting on war paint about to go into battle together.' And it was one ear out the other. I found out I was ill and one day Charlie shows up at my house, unannounced. He shows up and I open the door and it was like we had a connection where we knew each other already. I was like, 'You must be Charlie.' I just knew. He came in and said 'I'm going to do a healing ceremony on you.' He laid me out on the living room floor and he said, 'Close your eyes, I'm going to take you on a little journey.' He had his eagle's feather and he was chanting and playing the flute. I literally was on a spiritual journey flying through the air, hearing nature and the wolves and the wind and everything. After he was done, he said, 'I'm going to sit you down and talk to you. I'm going to tell you some things you're not going to understand, but as time goes, things are going to happen and fall into place, and you're going to start understanding. But through this, the wind is going to be your spirit guide.' And again, it was in one ear out the other with this. And I'm like, 'Okay.' That quick, he was gone. He left and I didn't see him since.

"Weeks had passed and I was having stomach issues, and one night we had a barbecue and a party. I went to bed and it was really windy and I couldn't sleep and my stomach was bothering me. I went downstairs to a guestroom bathroom and outside the window, it was so windy. There was a bunch of beer cans from the party in a whirlwind making clanging noises. I was in there on the toilet and I released something out of my body and had this overwhelming feeling that I just got rid of something, the sickness out of my body. As that happened, the winds stopped and the cans hit the ground. I was like, 'Wow!' I really had this belief that I didn't have cancer.

"I woke up my wife and said, 'Guess what? I just got rid of the cancer downstairs.' She was like, 'What? Shut up. Go to bed.' It was wild. That week they did my bloodwork for the tumor and the doctor told me the tumor was cancer-free. The cancer was gone out of the tumor. So, that was just one story. From that point, I went up to the mountains and saw another medicine man because my tumor was the size of a squash inside my chest cavity. He was a direct descendant of Geronimo. He lived with wild wolves. To approach his house, you have to go through the pack of wolves, and if they show aggression, you have to turn around, get back to your car, and leave. My son was 14 and he came with me and did this. He didn't want to walk through the wolves, so I walked through the wolves first to get to the house, and got in, and brought my son, and said, 'Bring him in.' I sat down and the [medicine man] taught me about grounding myself to the earth, focusing my energies on getting on the tumor and shrinking the tumor. And so I did some of the stuff he had talked with me about and I think three or four weeks later, the tumor was the size of an orange, small enough to have an operation. It was the belief that it was working. Spiritually and mentally, that's what I was looking for, something like that. I was raised Catholic, but never stepped into my native roots this hard in my life until I needed to. After that, we wrote a song, 'Native Blood', which is really from what that did to me, spiritually with my roots of Native Americans. And here I am!"

Alex: "It's complicated. [Laughs] I think it's good to be open to spirituality, but you shouldn't refuse science. There have been very strange coincidences that are so bizarre that it's hard to believe there isn't something. But then you try to explain what it is, 'Oh, this happened because it's my cousin that passed away, and it's his spirit that did this.' No, you don't know that!"

TESTAMENT's twelfth album, "Brotherhood Of The Snake", will be released on October 28 via Nuclear Blast.

The cover was once again created by renowned artist Eliran Kantor, who also handled the art for the TESTAMENT's last album, 2012's "Dark Roots Of Earth", and also worked with bands like HATEBREED, SOULFLY and KATAKLYSM in the past.