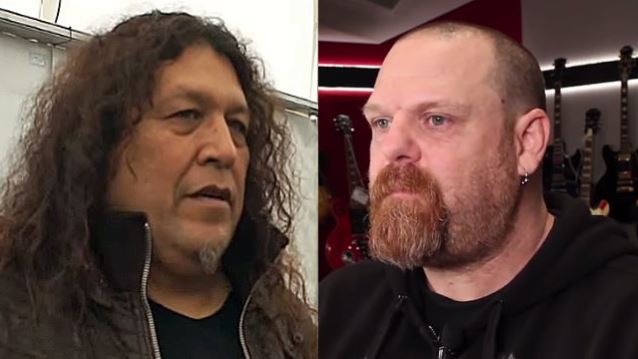 TESTAMENT's Chuck Billy has shot down Rob Dukes's allegation that Chuck was "responsible" for getting him fired from EXODUS.

Billy, who is part of the EXODUS management team, was accused by Dukes of masterminding his exit from the band and bringing back his predecessor, Steve "Zetro" Souza, who previously fronted EXODUS from 1986 to 1993 and from 2002 to 2004.

Now, in a brand new interview with Sticks For Stones, Billy has denied that he was pushing for Dukes to be dismissed from EXODUS, insisting that the decision was ultimately made by the members of the band.

Asked if there is any truth to Dukes's statement that Chuck was responsible for EXODUS's split with Rob and reunion with Zetro, Billy said: "No, there's not at all. I know Rob knows the truth about that. The only thing I did was, working with the band at the time, I made a suggestion, 'Either get somebody brand new or give Zet a shot.' And so they gave Zet a shot. And no matter how bad three of the guys in the band didn't want Zet back in, I think Zet proved himself by kicking ass on the demo. And I think Zet is a recognizable EXODUS voice. So, you know, it made sense, but it wasn't me pushing it. It was just me presenting it to the guys, and the guys made the decision."

Dukes told Canadian rock journalist Mitch Lafon last November that Chuck was most definitely to blame for him getting fired from EXODUS. He said: "I think Chuck's responsible for it. I think Chuck and their management, Metal Maria, I think they were looking at [EXODUS's] record sales from the '80s and they were baiting them into, 'Look, if you do this, you're gonna get this.' I mean, I was there for it. I even spoke up. I even said it in front of Chuck to his face. I said, 'Gary [Holt, EXODUS guitarist and main songwriter], I think it's a conflict of interest having the singer of TESTAMENT be your fucking manager. Because, what makes you think that he's not gonna put his own band ahead of you every single fucking time? It's a conflict of interest, Gary. This is not a good thing to happen.' And they were, like, 'No, I don't think it's a bad thing at all. I think it's fine.' And I'm, like, 'Ah, okay.' And you know what? That's kind of what they did…"

He continued: "Let me give you a scenario. METALLICA calls [EXODUS's] management, and they say, 'Hey, man, we want EXODUS on this tour.' What's gonna keep Chuck Billy from going, 'Well, I don't know if EXODUS will work out, but I know TESTAMENT can do it.' Do you know what I mean? Why wouldn't he do that? I'll tell you this: I would do it. I would fucking do it in a fucking second. 'Cause I'm fucking honest. But nobody there in that whole world is honest. It's all craziness."

Billy elaborated on how he was involved in EXODUS's decision to bring back Zetro during an interview with San Francisco's Fox affiliate KTVU. He said: "The band and Rob — the previous singer — before we got involved with EXODUS, they had history with him. Without going to deep, we didn't know much about that. All we knew at that point was that we were getting ready to do a new record and that possibly Rob might not be on this one."

He continued: "What do we do? Do we go out, start from scratch and get a new singer, or do we maybe bring Zet back into the fold? That's where it kind of went. So we all tossed it around and said, 'Well, probably the easiest thing that makes sense too is Zet, because Zet knows all the old material. Because he was in the band and I think he could step right in and nail the new record right away.'

"So that's kind of where it started. We just had Zet come in and sing a song. Let's just start there with a new track off the new record. So Zet had about one day to listen to it. And he came in the next day and knocked it out in one take and we sent it to Gary and [the other guys in the band]. And they said, 'Okay. We know what we're going to do.'

"And that's about how it happened. It wasn't a big management thing. We just facilitated and made sure they all were going to communicate. Because communicating among band members, especially bands that are trying to get back together, it's not the best. [Laughs]"

Holt in 2014 defended the way EXODUS fired Dukes, saying that "much time" was spent mulling the decision before the final move was made. He also shot down Internet speculation that the split with Dukes was motivated by financial reasons or that it was masterminded by Billy, who co-founded the management company Breaking Bands LLC. "It isn't for the money [and] Chuck did not orchestrate this," Holt said. "There were issues behind the scenes and we came to a conclusion."

Holt, who previously said that the decision to fire Rob and re-hire Zetro "was the most difficult decision of our lives, one the entire band made," was once again full of praise for EXODUS's former frontman, saying: "I wish nothing but the best for Rob, [and I] have nothing but love for the man. He will be a force for a long time and I am proud of him and how he went from a dude with a pink mohawk to a vicious thrash vocalist. He is a killer singer and we have total respect for him and love the music we made together."