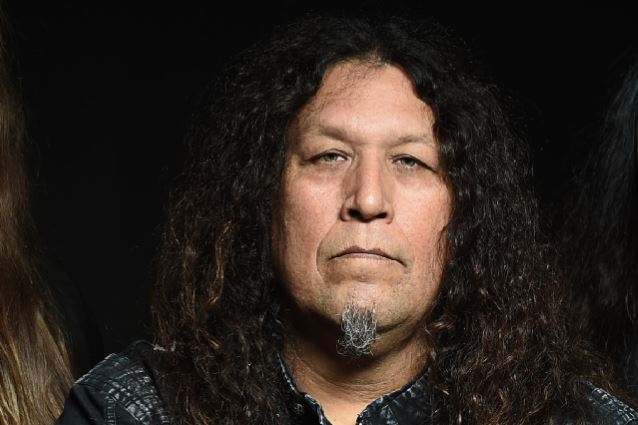 In a brand new interview with Metal Assault, TESTAMENT vocalist Chuck Billy was asked what he is doing to prepare for the band's upcoming North American tour with SEPULTURA and PRONG. "I'm cutting back on my weed-smoking right now [laughs], so not as much weed," he said. "I'm running more on my bike every day. And I bought this training mask that athletes use to train for high elevation. You put on this mask and it feels like you're at five thousand feet above sea level, so it makes it hard to breathe. So I've been doing this new training exercise with the mask and it's really helping. I really am putting some time in training for this tour, because I don't want the band to have to cancel a show because of me."

Asked how hard it is for him to reject weed-smoking on tour in order to save his singing voice, Billy said: "It's hard because I like smoking weed, but right now I'm cutting back and probably by the time I start the tour, I won't be smoking at all. So, by the time I get on the road, it won't be so hard, you know. I'm probably addicted to smoking weed, I'm sure [laughs], so I'll go through my joneses now before I go on tour and get that out of the way."

TESTAMENT's tour with SEPULTURA and PRONG will kick off on April 6 in Albuquerque, New Mexico.

TESTAMENT's latest album, "Brotherhood Of The Snake", was released last October via Nuclear Blast. The cover was once again created by renowned artist Eliran Kantor, who also handled the art for the TESTAMENT's last album, 2012's "Dark Roots Of Earth", and also worked with bands like HATEBREED, SOULFLY and KATAKLYSM in the past.