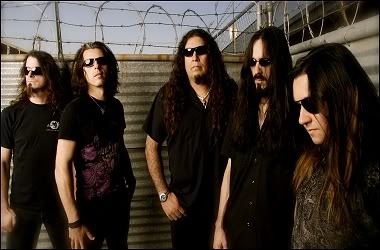 Veteran San Francisco Bay Area metallers TESTAMENT have been confirmed for the Chicago Powerfest 2008, set to take place on May 1-3 at The Pearl Room in Mokena, Illinois.

Commented festival organizers, CRJ Productions: "The news came just in time for Christmas, and made the holidays that much better for us considering how long we've been trying to make this happen! It's been several years since the Legion has pummeled a Chicago area venue and we're all very hungry to see them do it once again! Their last Chicago area headlining performance was in 1999...although, it's been much longer since they've played here with Alex Skolnick, so this should give Midwest fans something to get really excited about."

TESTAMENT will release its new album, "The Formation of Damnation", in North America on April 29, 2008 via Nuclear Blast Records.

Bostaph, who was a member of TESTAMENT for a brief period starting around February 2004, had previously played several live dates with the group in 1992 and appeared on the band's 1993 live EP, "Return to the Apocalyptic City". He also toured with TESTAMENT in 2006.

TESTAMENT's current lineup is rounded out by Chuck Billy on vocals, Eric Peterson on rhythm guitar, Alex Skolnick on lead guitar and Greg Christian on bass.

A new photo of the current TESTAMENT formation can be found at this location.