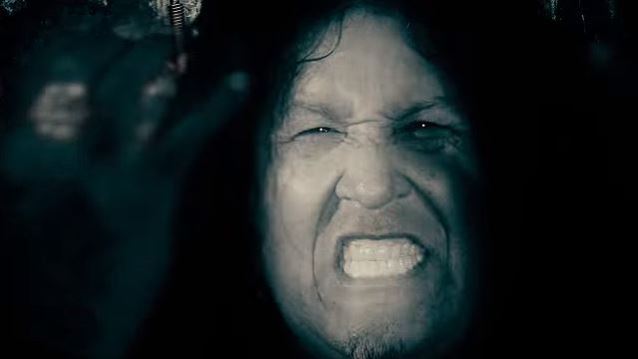 TESTAMENT singer Chuck Billy was interviewed on a recent edition of "Whiplash", the KLOS radio show hosted by Full Metal Jackie. You can now listen to the chat using the widget below.

Asked how the more difficult songwriting process for TESTAMENT's latest album, 2016's "Brotherhood Of The Snake", forced him to ultimately become better at what he does, Chuck said: "Well, I think it was more of from the gut reaction to the songs, because by the time we got into the studio, the songs weren't even completed yet. Whatever was going on, me and Eric [Peterson, guitar] had been working on that record for, it seemed like, at least two years, and over the two years, I felt we should have been moving along, the process along, a lot quicker. So, you know, there was a little frustration and anger and a little stuff going into the recording of the record, and I think maybe on everybody's part, because everybody kind of went in blindfolded just with the riffs and parts of the songs. But once we got in there, I think just maybe the pressure of having… you know, the pressure's on and kind of just going with your gut feeling maybe just drove everybody over the edge a little bit just to get a little more creative and just… And, fortunately, we have guys like Gene Hoglan [drums] and Steve DiGiorgio [bass] playing, and they did a great job on it and tore it up. But, you know, I think at the end of the day, the product that finally came out, especially for the mix and song-wise, the songs really did come together, and what Eric ended up having, [which was] a lot of parts, I ended up listening to what they were. I just kind of worked around it where a lot of the time I'm really the one with Eric trying to change stuff and, 'I'm gonna sing over this riff and that.' And this one, I just said, 'Just go for it right now, and I'll just jump in and do what I do.' And it all really came together by taking that approach and just kind of going for it. The record, I felt, is probably some of the strongest material we wrote in a while."