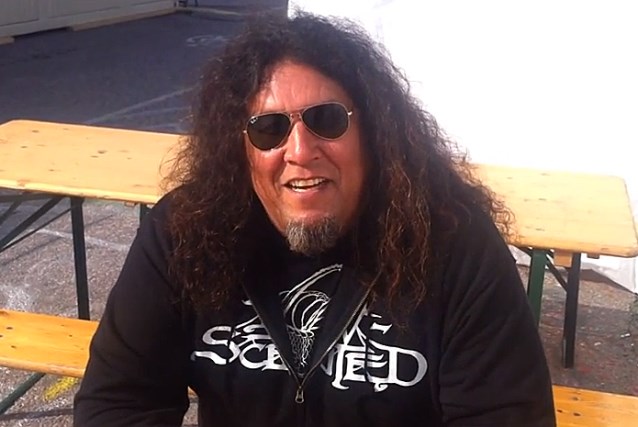 Greg Prato of Songfacts recently conducted an interview with vocalist Chuck Billy of San Francisco Bay Area metallers TESTAMENT. A couple of excerpts from the chat follow below.

Songfacts: Looking back at the early days of thrash metal, at what point did you realize that there was a movement going on and that it was also clearly different from the opposite of the spectrum, the glam metal bands that were going on at the time?

Chuck: Being from San Francisco, especially the late '70s/early '80s, the Bay Area was more glam metal and punk rock was the aggressive, rebellious kind of music that was going on here in the day. And once METALLICA and EXODUS and those guys came on the scene in the early '80s, it kind of changed. This movement grew so quick, and all those glam bands left the San Francisco Bay area and went to L.A., where everybody ended up in that glam movement. So the next thing you know, we were just more of a punk rock/heavy metal community, that grew really quick. And there were so many places to play back in those days. You could go to a show at The Stone and then later on catch the midnight show across the street at the Mabuhay Gardens or the Rock On Broadway. Or go down around the corner and there's another venue. Then everybody seemed to follow, and you'd always see the same people and the same crowd at all these shows. It was a little community of the same people, and then the after-parties — going to Paul Baloff's house to a party or something and the same crowd from the show is there. It was just a trippy scene that grew really quick in those early years.

Songfacts: By and large, how does songwriting work in TESTAMENT?

Chuck: With us, it's been me and Eric [Peterson, guitarist] for a long time. Eric will come up with a structure, what he thinks is the verse, chorus, lead sections. Once I hear it, I listen to where I feel that the vocals should be, and then I'll either rearrange it or stick with what he hears and come up with the arrangement. Once we get the arrangement down, Eric will take it back again and then rework it to make it all flow together. If he has to build an extra part to connect what he thought was the chorus that's now a verse, going into a new chorus or something, he'll redo it. That's always worked the best. There are some songs in the current years, like "More Than Meets the Eye" or even "Native Blood", some of those songs we came up with the riff and he had a lot of it already completed. From the first time we heard it to trying it live in the studio, the patterns were there, the song structure was there, and it came together really quick. And those are the ones where we go, "Wow, this is a special song because it just came together so quick and it still stands strong even after you reexamine it and make sure it's got everything we need in it." And those don't happen all the time. Most of the time, it's just building them. But sometimes we get lucky in that sense, and I think after working with somebody for 25-plus years writing music together, it's like anything in life you do that long, you hone your craft and get better at it. We kind of know what each other is thinking at this point and what our limits are and what keys not to go in and play in. He knows what I turn down as far as the scales and the keys he picks to write songs in. We've been pretty lucky in that sense as a team.

Songfacts: Who are some of your favorite songwriters as far as either rock bands or solo artists go?

Chuck: Well, METALLICA's James Hetfield has always been an inspiration with clever lyrics. When I first started hearing METALLICA, it was something new to me the way his cadence of vocal styles sang to the music. Because when I was growing up, I was more like, UFO and THIN LIZZY and SCORPIONS and PRIEST, where the vocalists were more melodic singers. So when there was that thrash attack, it was a whole new thing to me. In TESTAMENT, it was what we were becoming, that same style. He really inspired me with his clever lyrics and clever hooks. Bruce Dickinson. Ronnie James Dio has always been a great songwriter and lyricist, same with Bruce. And then Rob Halford. Those guys always were my heroes.