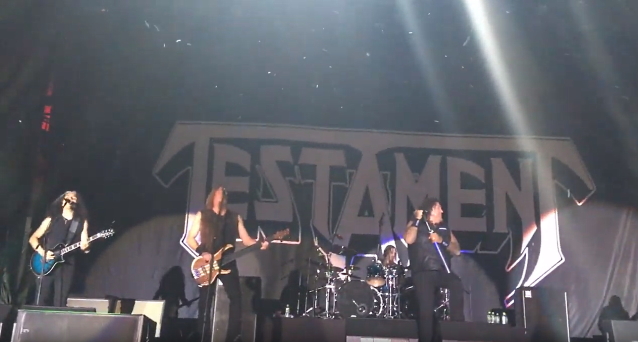 TESTAMENT was joined by MEGADETH drummer Dirk Verbeuren for its performance Friday night (December 6) at Knotfest Colombia in Bogotá. Dirk was filling in for regular TESTAMENT drummer Gene Hoglan, who couldn't make the gig for reasons that have not been disclosed.

A short time after the concert, Dirk took to his Instagram to share a few photos of the performance and included the following message: "Killer show tonight at @knotfestco with the mighty @testamentofficial! It was truly an honor to fill in for @therealgenehoglan whose masterful beats and fills have inspired me for 30+ years! And also to finally play in person with my longtime friend and bass wizard extraordinaire @sdglowend- as well as Chuck, Eric and Alex- all total masters at their craft!"

The 44-year-old Belgian-born-and-now-Los-Angeles-based Verbeuren had been playing with SOILWORK for more than a decade before being recommended for the MEGADETH gig by LAMB OF GOD's Chris Adler, who called Dirk "probably [one of the] top three drummers in the world."

In interview with the KATT Rock 100.5 FM radio station, MEGADETH leader Dave Mustaine described Dirk as "is one of the most pleasant, easy-to-get-along-with guys I've ever met in my life. I'll walk up to him and he'll smile and lean forward and pat me on the back," he said. "He goes [adopts thin accent], 'How's it going, buddy?' I could say, 'Oh, man…'… anything. 'Oh, okay, buddy.' [He] smiles and pats me, 'cause he's just a happy guy. I've never, ever, ever seen him not smile."

Killer show tonight at @knotfestco with the mighty @testamentofficial! It was truly an honor to fill in for @therealgenehoglan whose masterful beats and fills have inspired me for 30+ years! And also to finally play in person with my longtime friend and bass wizard extraordinaire @sdglowend- as well as Chuck, Eric and Alex- all total masters at their craft! Thanks to the crew: Steve, Carlos, Christian, Freeway and Kyla for taking great care of us. And to @samgamps at @officialtamadrums for his help with the kit. Maybe I'll post a drumcam at some point. - 📷: @carlosgunngt - #testament #testamentlegions #knotfestco #chuckbilly #ericpeterson #alexskolnick #stevedigiorgio #genehoglan #brotherhoodofthesnake #thrash #drumtillyoudrop