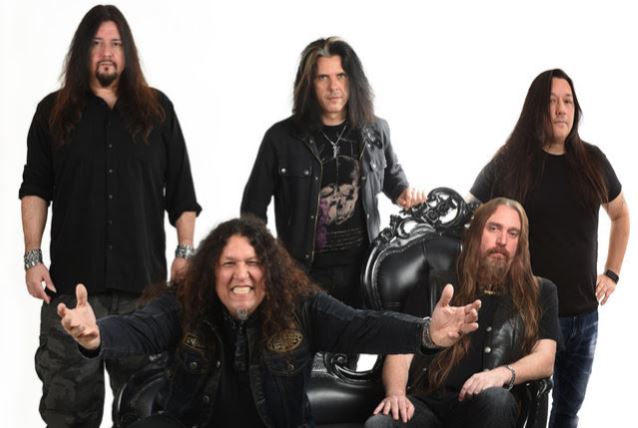 TESTAMENT: More 'The Brotherhood Of The Snake' Album Details Revealed

Peterson told Metal Maniac about the new disc: "It came out really, really good," he added. "I'm really happy with it. It's very diverse, but it's very epic. There's nothing on there that breeds commercial. And I think for thirty years of recording music and trying different formulas and stuff, I think we've found a formula that is very metal. I think for the metal fan that is looking for something for the nook and crannies… not just your normal, 'Oh, it's got a thrash beat and a riff.' There's a lot going on here. And just the title: 'The Brotherhood Of The Snake'. You're gonna expect something more in-depth. It's not, like, 'Satan's Death' or 'Kill 'Em All'. Well, no, 'Kill 'Em All' is killer. Sorry. But you know what I mean. I mean, it's more in-depth sounding."

Peterson previously told Metal Forces about the musical direction of "The Brotherhood Of The Snake": "It's different. This one is more thrash. I mean, this has got some of the fastest stuff that we have ever played. Usually, we have one or two thrash songs, and then we have some mid-tempo, and then we have a slow, heavy one, and then up-tempo kind of stuff. Half of the new record is thrash, which we've never done before. Even with our first record ['The Legacy', 1987] , there's 'Over The Wall' and 'First Strike Is Deadly', but then there's stuff that's back and forth from mid-tempo to thrash like 'Do Or Die' or 'Apocalyptic City'. Full-on thrash though, like six or seven songs, has never been done by us. It's kind of a trip to hear it."

He continued: "It's kind of like 'Demonic' and 'The Gathering', but a little bit wiser, I think. Chuck's not singing so death. I mean, he does some death stuff but he's singing more like he did on the last record and then with the craziness of 'The Gathering' or even heavy stuff like 'Demonic'."

Billy echoed Peterson's sentiments, saying "The Brotherhood Of The Snake" "is definitely gonna be geared up to a little more faster than 'Dark Roots Of Earth' record, definitely a little more aggressive musically, for sure, probably vocally as well. I think I'll probably attack with a little more heavier voice on this one. I'll kind of feel my way through the song, which voice to use. But there's definitely gonna be some 'Demonic' [-type] stuff, but again like 'The Gathering', 'cause I think I did a little bit of everything on that record, which that's what we'd like to accomplish."

Chuck also talked about the lyrical themes covered on "The Brotherhood Of The Snake". He explained: "[The title track is] basically about a lot of the early secret societies that started taking over power, trying to control the society and spawned off into illuminatis and stuff like that so it's kind of going back to a lot of that — a lot of human control and religions and the similarities between religions and alien beings and stuff like that. I've been fascinated a lot by a lot of programs that show a lot of different religions and all the writings or hieroglyphics on the walls always have the same type beings with all of these religions. And it makes you think, wow, so long ago, these people didn't know people on the other side of the ocean, but yet they have these common sightings within their religions that they talk about and reference. And it just really was interesting to me, opening my eyes a little more to religion. I was raised Catholic, but growing up and just seeing these connections just really makes me think about all the religions, you know? And the connection between the human race and aliens, it's just really fascinating to me. So we started spotting a lot of ideas for songs off of that."

TESTAMENT will promote "The Brotherhood Of The Snake" by teaming up with AMON AMARTH for a European tour this fall. A summer festival run will kick off next week.