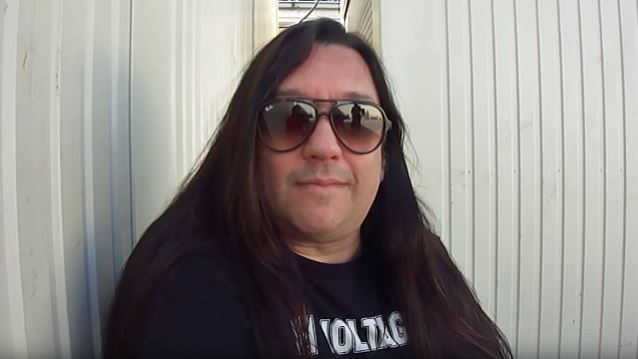 PlanetMosh conducted an interview with guitarist Eric Peterson of San Francisco Bay Area metallers TESTAMENT on July 1 at the Tuska festival in Helsinki, Finland. You can now listen to the chat in two parts below. A couple of excerpts follow (transcribed by BLABBERMOUTH.NET).

On what fans can expect from TESTAMENT's upcoming album, "The Brotherhood Of The Snake", which will be released on October 28 via Nuclear Blast:

Eric: "It's definitely got some twists in there. It's hard to pinpoint. I mean, it's kind of a full circle of everything. It's got… I would say, like, 'The New Order' with 'The Gathering' meets 'Dark Roots Of Earth'. I think we kind of know what not to do and what to do. The only thing I would say, unfortunately, and I don't mean that in a bad way, but we were so booked [with our live shows] that we really didn't have time as a band to really focus in and jam on these songs. I kind of wrote everything, and everything happened at the last minute. To me, I like 'em, 'cause I wrote everything, but it's good to get outside opinions and go, 'Oh, yeah, maybe I should do that.' We had some of that stuff going on. I mean, we're still kind of editing stuff as we're going along right now, but it was written really, really, really quick. And we were kind of… I don't wanna say 'forced,' but it was kind of written so we could make ends meet on certain tours, to make everything happen. And if we didn't record when we recorded in April and May, the only window that would be open would be September, so if we did September, and we have some shows in October, we would be looking at the record coming out next summer. And it would be killer, but are we all gonna be here still? So, it's, like, 'Look, it's good. Let's make it happen.' And we made it happen. So it's funny what you can do under pressure… you know, deadlines. Pressure helps, 'cause it kind of kicks you in the ass a little bit. Maybe you make wrong decisions because you're, like, 'Just fuck it!' But for the most part, for me, I'm pretty much a stickler and I'm super, super picky. The good thing is there's another five songs that I didn't get to put down 'cause we didn't have time. So I'm a little bit ahead of the game for the next one, so that's good."

On the lyrical content of "The Brotherhood Of The Snake":

Eric: "It's more of, like, secret society stuff. The way we did it, I don't think it's cheesy, because it's not just a concept record, but it's also got things that are kind of important to people, like medical marijuana, stuff like that, talking about the business of it and just the benefits, and why we don't use it, because of money. And hidden issues of solar energy and stuff… I mean, we don't have a song that's called 'Solar Energy', but there's things that we talk about that will make you sneak it in… [it will] trigger something in you, and you don't think about it… So we put in a chip in there without you thinking about it. I'm really, really happy. There's a couple of standout tracks. 'The Pale King' is gonna be a great song. 'The Brotherhood Of The Snake' [title track]… actually, we just did a lyrical video for that. That came out really, really cool. We did a lot of research and made sure it wasn't cheesy and your typical society stuff. It goes back to Sumerian times, [we] even use some names from that kind of stuff."

On the status of "Dominion", the long-awaited third album from his black metal side project DRAGONLORD:

Eric: "That's another thing that's taking forever. Actually, I am two songs away from being done. Vocally, I have to sing two songs. And the reason I'm taking so long is because I would have put it out maybe a year or two years ago — that sounds crazy… I signed the deal in 2012, and they knew it was gonna take a little bit more time 'cause of my schedule. There was one point where they were, like, 'Look, maybe give us some money back, and when you're ready…' 'Cause they didn't believe that I had done it. So I sent them some songs that were done, and they wrote back. They go, 'Take all the time you want.' So that was, like, 'Okay, cool. They like it.' To me, it's one of the best things I've ever done. So I'm super, super proud of it. I can't wait for people to hear it. It's gonna be delivered to the company in September. I was trying to get it out this year, but they're gonna put it out first quarter next year. And it's really cool. It's the first time, too, I've ever… not 'forced,' but it's the first time for the black metal genre of doing a… I don't wanna call it a 'ballad,' but it's a slow, darker song. More something that would be off [BLACK SABBATH's] 'Heaven And Hell'… I did a duet with the artist Leah. She's like a Celtic singer. I flew her out to the Bay Area, and I flew her out just to do… instead of all the keyboard stuff, the choir stuff, I had her redo everything… she did, like, thirty tracks just so it sounds like a real choir. And it was just mindblowing. And then while we were there, we kind of wrote this song together. And it's called 'Love Of The Damned'. It's about a girl who falls in love with the devil. It's kind of crazy stuff. But it's a duet. And it came out fucking pretty amazing. If there is a video for it, I'd probably need a lot of money to do it justice."

TESTAMENT will promote "The Brotherhood Of The Snake" by teaming up with AMON AMARTH for a European tour this fall.