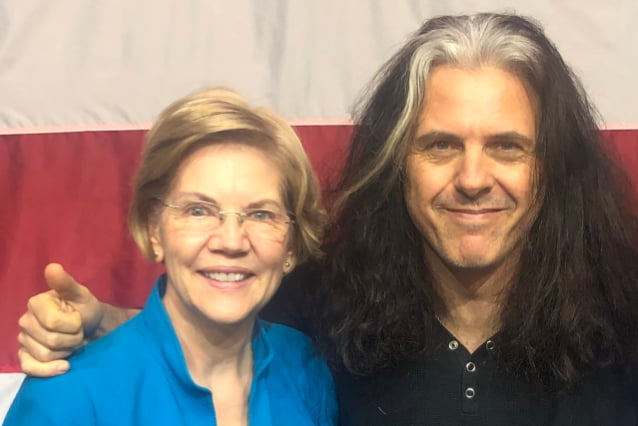 Earlier today, Skolnick took to his Twitter to declare: "I'm voting for #ElizabethWarren in the New York primary."

This past Tuesday (February 18),Alex tweeted out a photo of him with Warren and wrote in an accompanying caption: "#PresidentWarren is electable. Pass it on." Later that same day, he wrote about his choice: "Nomination is far from certain, but she's not to be counted out just yet. Yes, she's made mistakes - so has everyone still in the race - yet the blame towards her seems unfair (& should pass). @ewarren's smarts, experience & decency should count 4 something."

One month earlier, on January 14, Skolnick was equally enthusiastic about the prospect of a Warren presidency, writing: "I'm ready for President Elizabeth Warren"

Warren was praised for her performance at Wednesday's debate after sliding in the polls following poor showings in Iowa and New Hampshire, the first states to host nominating contests. Warren came in third in Iowa and fourth in New Hampshire. She also finished in fourth place in Nevada.

Despite this, Warren surged to 19% and second place in a CBS News/YouGov national poll released Sunday, trailing front-runner Sen. Bernie Sanders (28%) but edging out Joe Biden (17%) and Michael Bloomberg (13%).

Skolnick has made no secret of his political views, frequently tweeting against Donald Trump's policies, including imploring the U.S. president to "get the HELL out of OUR country" in August 2017 after Trump tweeted about his proposed border wall while Tropical Storm Harvey made landfall in Texas.

Back in 2012, Skolnicktweeted that Ted Nugent, Donald Trump and Dave Mustaine didn't "seem that reasonable" to him because of their "militant" support of then-Republican presidential candidate Mitt Romney.

I’m voting for #ElizabethWarren in the New York primary. https://t.co/pAFFUK2EhQ

Thanks, Pete. Agreed. Nomination is far from certain, but she’s not to be counted out just yet. Yes, she’s made mistakes - so has everyone still in the race - yet the blame towards her seems unfair (& should pass). @ewarren’s smarts, experience & decency should count 4 something.