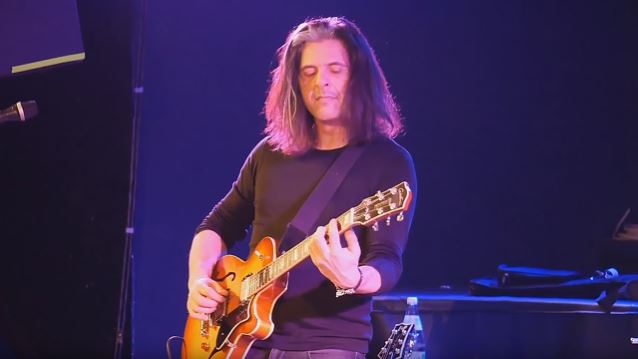 In a brand new interview with Metal Wani's William Richards, TESTAMENT guitarist Alex Skolnick was asked about the progress of the songwriting sessions for the band's follow-up to 2012's "Dark Roots Of Earth" album. He said (hear audio below): "[TESTAMENT guitarist and main songwriter Eric Peterson and I] don't get together that often, but when we do, we come up with some really strong material. And that's what happened last time around. We've had some sessions together, and some of that material, I think, will wind up on this record. But I also know that Eric, he works on a lot of material on his own too. And I'm happy to just sit back and let him do that."

Skolnick also commented on recent reports that TESTAMENT's next studio album will feature a musical direction that is at least partly a throwback to the more aggressive, thrashier direction of 1999's "The Gathering" LP. He said: "'The Gathering' was a period of time I wasn't in the band, and I'm respectful of that. And if [Eric is writing] stuff that's more in that direction, I'm not as involved in, as far as the composition. So I think there will be a lot of that stuff, but that's also good music, and that's a period of the band I respect. Hopefully this record will be a blend of that without abandoning the other parts of the band."

TESTAMENT has set "The Brotherhood Of The Snake" as the tentative title of its eleventh studio album, due later in the year via Nuclear Blast. The CD's projected title track, which has already been recorded, is expected to be made available in the coming weeks.