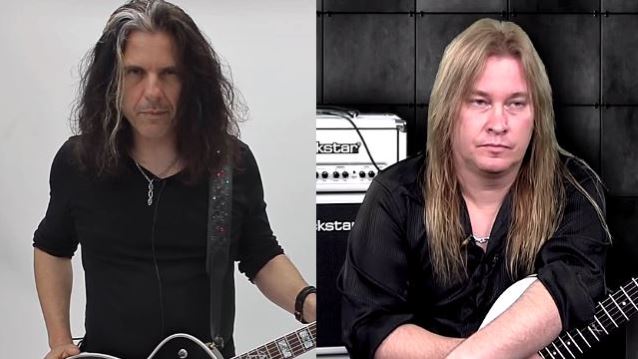 TESTAMENT guitarist Alex Skolnick is sitting out the first three shows of the band's North American tour with SLAYER and CARCASS due to scheduling conflicts with this weekend's Axes & Anchors cruise, where he is booked to perform. Replacing him for tonight's and tomorrow night's concerts in Chicago, Illinois as well as Monday night's gig in Nashville, Tennessee is Canadian guitarist Glen Drover (MEGADETH, KING DIAMOND),who has filled in for Skolnick in the past.

Commented Glen: "Sold-out show in Chicago tonight! SLAYER and TESTAMENT. I'm filling in for Alex for a few shows in TESTAMENT. First time playing onstage in years. It's going to be awesome!"

Added Alex: "Heads up: No Chicago / Nashville [for] me next [week]. Sorry [to] miss; was already booked. There'll be a good sub [and] I'll play Richmond [and] all the rest."

Skolnick will rejoin TESTAMENT on stage on Wednesday, February 24 in Richmond, Virginia.

TESTAMENT's U.S. tour with SLAYER and CARCASS is scheduled to end on March 26 in Las Vegas, Nevada.

TESTAMENT has set "The Brotherhood Of The Snake" as the tentative title of its eleventh studio album, due later in the year via Nuclear Blast. The CD's projected title track, which has already been recorded, is expected to be made available in the coming weeks.

Drover previously played with TESTAMENT in 2008, when Skolnick was on tour with TRANS-SIBERIAN ORCHESTRA, and again in 2010.