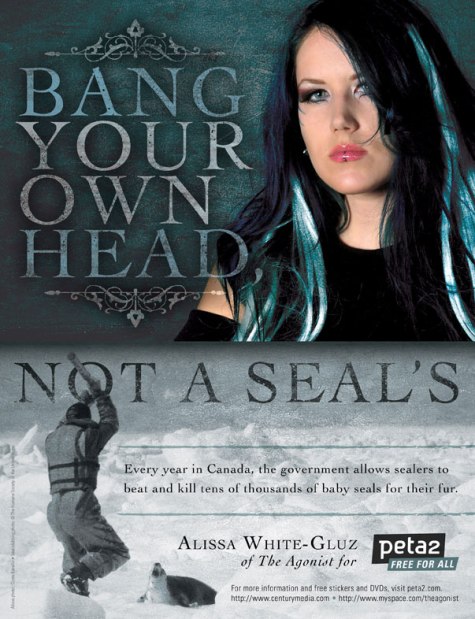 If there's one thing that hits a sour note with Alissa White-Gluz, the powerful voice of the Montreal, Quebec, Canada-based metal band THE AGONIST, it's animal abuse. The singer uses her voice to raise awareness about animal suffering every chance she gets, and that's one of the reasons why she's snagged a Libby Award in the category of "Breakthrough Artist" from peta2, PETA's youth division. The sixth annual Libby Awards ("Libby" is for "liberation") honor animal-friendly people and products.

White-Gluz took a stand against the universally condemned annual seal slaughter in her native Canada by shooting a striking peta2 ad that shows her above a photo of a baby seal who is about to be clubbed and reads, "Bang Your Own Head, Not a Seal's." She also sat down for an exclusive interview with peta2.

"The seal hunt is something I'm … so ashamed to even be remotely associated with," says the Canadian-born vocalist, who also discusses how grateful she is that she was raised vegetarian and has since gone vegan. "I'm shocked that it's still going on and still encouraged by the government."

White-Gluz has also spoken out against the fur industry, and she encourages everyone to buy only cruelty-free personal-care products.

Also up for "Breakthrough Artist" were Steve Aoki, YOU ME AT SIX, and MAN OVERBOARD.

Twenty-nine Libby Awards will be given out this year, recognizing everything from the best cruelty-free cosmetics company to peta2's favorite animal-friendly celebrity. Each winner will receive a framed certificate and be featured on peta2.com.