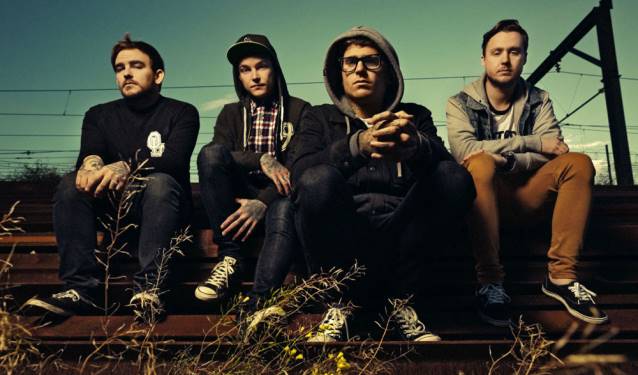 THE AMITY AFFLICTION: Footage From The Studio

Australian post-hardcore/metalcore band THE AMITY AFFLICTION entered the studio last month to begin recording its fourth studio album, the follow-up to 2012's "Chasing Ghosts", which debuted at No. 1 on the Australian chart and was certified gold in the group's home country.

THE AMITY AFFLICTION has since posted two studio diaries on the progress of the record, which Alternative Press recently selected as one of their "Most Anticipated Of 2014." Check them out below.

Speaking to the AMH Network last August, THE AMITY AFFLICTION frontman Joel Birch stated about the band's plans for the new CD: "We only sort of get better with time. It will be the same AMITY sound, but better. [laughs] A better record, but the same passion, the same heavy music."

Asked if there is anything in particular he would like to express on this album he might not have been able to in the past, Birch said: "I don't know. I kind of can't say. That comes when it's actually happening. I don't like to put any pre-conceived notions out there before sitting down to write. It's all very personal and in the moment. It just depends what I'm going through at the time. It doesn't have its own agenda."

THE AMITY AFFLICTION will join BLESSTHEFALL on a U.S. tour beginning on April 8 in El Paso, Texas at Tricky Falls and continuing through mid-May where it will eventually wrap up at Mesa, Arizona's Nile Theater on May 15. The trek, dubbed "The Hollow Bodies Tour", will also feature SILVERSTEIN, SECRETS and HEARTIST.