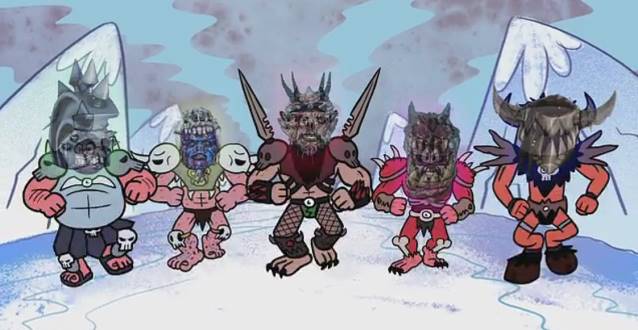 For the last two years animators Myke Chillian and Tommy Meehan have been working with the members of GWAR to create a "GWARtoon" that was appropriately disgusting and objectionable enough to most accurately represent the most dangerous band in rock and roll history. After all this long and hard work, today Funny Or Die finally premieres "The Animated Tales Of GWAR".

Animator Myke Chillian described "The Animated Tales Of GWAR": "Lead singer Oderus Urungus loses his murderous-mojo prompting the rest of the band to embark on an Antarctic quest for the cure. 'Weird Al' Yankovic guest stars."

Brutal front-fiend Oderus Urungus had this to say about the project: "I hate cartoons... cartoons are for kids, and kids are strictly for eating. But I just might have to back up a little and say that this is the greatest cartoon ever, even if I still hate it, just because it's about US."

Funny Or Die is a comedy video web site founded by Will Ferrell and Adam McKay's production company, Gary Sanchez Productions. The site contains exclusive material from famous contributors such as Judd Apatow and James Franco, and also has its own team which creates original material for the site. Many clips on the site feature well-known actors like Charlie Sheen, Ryan Gosling, Patrick Stewart, Daniel Radcliffe and Charlize Theron.

GWAR's new album, "Battle Maximus", sold around 3,500 copies in the United States in its first week of release to debut at position No. 109 on The Billboard 200 chart. The CD — the band's first full-length studio effort since the loss of their longtime guitar player Flattus Maximus — was issued on September 17 on Metal Blade Records.

The Animated Tales of GWAR from GWAR
Find more on Gwar